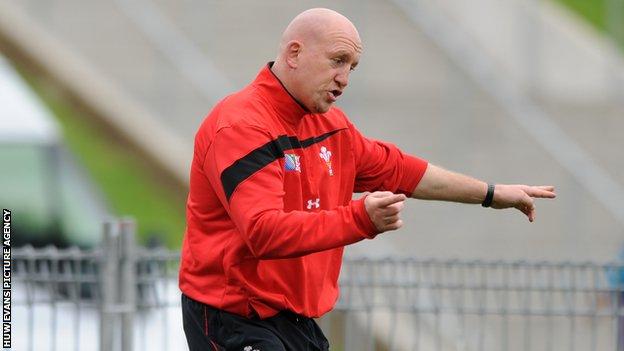 Shaun Edwards is sure Wales have "no hang-ups" about their poor southern hemisphere record as they seek a first away win down under for 25 years.

Wales have not beaten New Zealand or South Africa away but Edwards is upbeat ahead of June's three-Test Aussie tour.

"We have to prove we are mentally strong enough to win," Edwards said.

"The Welsh statistics against any team in the southern hemisphere don't make good reading, especially away from home."

Wales' defence coach led the advance party of 16 players to Brisbane over the weekend to prepare for their first ever three-Test series in Australia.

Wales have not beaten a Tri-Nations team for 11 games, since defeating the Wallabies 21-18 in Cardiff in November 2008.

But Edwards believes Wales' 2012 Grand Slam winners will have no problem channelling their frustration.

"This team wants to make its own history and has no hang-ups about the statistics from the past," Edwards insisted.

"They are a little bit angry they haven't beaten Australia in the recent past."

Edwards has warned his players that they will have to speed up the game that earned them a third Grand Slam in eight years if they are to keep pace with Australia in Saturday's First Test in Brisbane.

"I've been telling them it will take 80 minutes of sustained intensity, sustained accuracy and sustained speed of the game to come out on top," he said.

It takes a minimum of five days to fully overcome the effects of jet-lag. That's why we came over early - it was the only viable option

"It is about getting there a step quicker than we are used to doing and we have to realise it is a bit of a quicker game and we have to adjust to that extra pace. The Australians are very skilful and we can't afford to give them an inch."

Having eased Grand Slam skipper Sam Warburton and his team-mates into action with a few swim sessions and light runs, Edwards took the players to leading local club Brothers in Brisbane for some gentle opposed practice on Monday.

Wales will be without injured pair centre Jamie Roberts and hooker Huw Bennett but the rest of their squad arrive with stand-in coach Rob Howley in the early hours of Tuesday. They will have a first combined run-out on Wednesday.

"If the whole team had arrived together this week we wouldn't have given ourselves any chance of winning at the weekend," said Edwards, who spent a year playing rugby league for Balmain Tigers in Brisbane.

"It takes a minimum of five days to fully overcome the effects of jet-lag.

"We also need to factor in the conditions, because even though it is winter here it will be quite warm. I've played here many times and I know it can be humid and energy-sapping for a northern-hemisphere player.

"The humidity can really test your stamina and we have to be ready to react to that."

Locks Ian Evans and Alun Wyn Jones are both set to be unavailable for selection. Evans is getting married while Jones is expected to attend his sister's wedding.