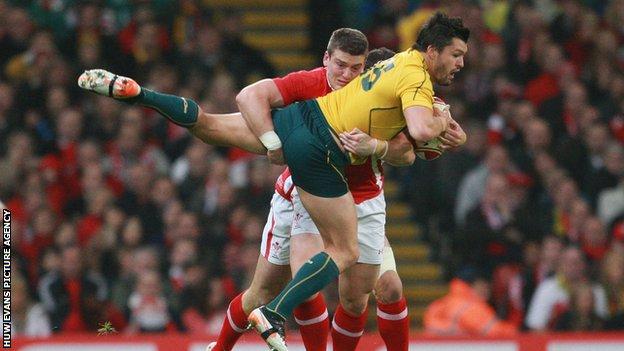 It says much about the status of Wales as Grand Slam champions - and their uncharacteristic recent ability to grind out narrow victories - that the bookies price them at only 4-1 against to win their three-Test series against Australia.

Those are miserly odds to achieve something no other Welsh team in history has managed, namely a series victory against one of the Tri-Nations hosts in their own land.

The odds appear meaner still when you consider Wales have lost seven of their last eight meetings with Australia, including the World Cup third-place play-off defeat and follow-up loss in Cardiff in December. Neither have they beaten the Wallabies in Australia for 43 years.

In short, even hot Welsh squads - like the 1978 Slam winners, who lost to the Wallabies 2-0 - have tended to cool rapidly once they pass over the equator.

Nine years ago they even managed to lose their seats on the plane, after a mutinous squad went on strike over slashed match fees.

The result was a two-hour delay before the team bus left for Heathrow, the humiliation of a missed flight costing £75,000, and a Test defeat in Sydney followed by another against the All Blacks.

But as the current squad prepares for Saturday's First Test in Brisbane there are valid reasons for viewing the bookies' odds in a better light.

The victory over the Barbarians on Saturday was Wales' sixth win in succession, results that included winning in both Dublin against Ireland and at Twickenham against England.

Of the Grand Slam regulars only Jamie Roberts and Huw Bennett are missing through injury, a reversal of trends from years gone by when big names complained of small ailments or, even more bafflingly, were "rested" by the national management.

This time it seems it is Australia who are beset by withdrawals with skipper James Horwill, Kurtley Beale, James O'Connor and playmaker Quade Cooper all sidelined.

If that sounds inauspicious for the Aussies, it should be balanced against the fact that they are a team who can still call upon the brilliance of David Pocock, Will Genia and Digby Ioane.

Wales need to go down, win and keep growing the spirit they have got. I think they have a very good shot

They have exciting youngster Luke Morahan breaking through and behind him, an 18-year-old - Chris F'Sautia - who is already being tipped as the next global superstar of the game.

In fact, the teams look well-balanced for a three-match contest. Wales have their strongest and most experienced pack for years while the Wallabies have a backline that has, at times, outplayed the All Blacks in the past couple of years.

Perhaps the most significant gulf is in expectation and public reaction.

Wales came fourth at the World Cup and were greeted like heroes. Australia finished third and went home to an inquest.

Barbarians coach and former All Blacks wing John Kirwan feels the momentum is with Wales.

"Wales are now a very good side," said Kirwan.

"Warren Gatland has brought an edge to them at the breakdown. Technically they are very good there and they bring that bit of the Welsh game where they have someone who can break the line.

"But if there is a moment to win, it is now and it is very important that the northern-hemisphere sides take these tours seriously.

"You cannot afford to go there and lose as it affects you mentally. Wales need to go down, win and keep growing the spirit they have got. I think they have a very good shot."