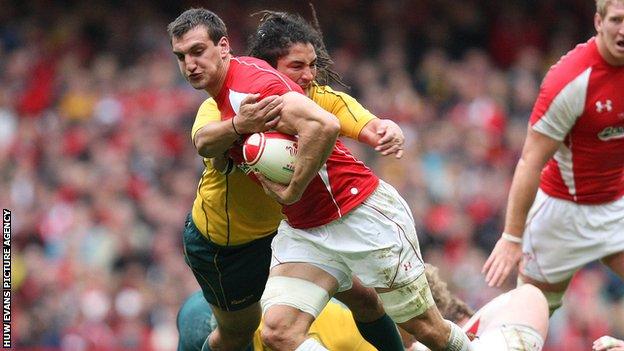 Sam Warburton is relishing the prospect of facing Australian captain and opposite number, David Pocock, in Brisbane on Saturday.

The Wales captain and openside flanker will lead his side in the first of three Tests against the Wallabies.

"It will be a great opportunity to play against David Pocock," said Warburton.

"He is one of the world's best number sevens and I respect him a lot - that's what will make the game even more exciting for me."

Pocock, the Western Force captain, took over the Australian armband from the injured James Horwill for the Wallabies shock 9-6 defeat to Scotland on Tuesday.

Warburton, who captained Wales during their 2012 Grand Slam campaign, is expected to lead the northern hemisphere champions into action against the the Tri Nations title holders.

He last played for Wales in the Grand Slam decider against France at the Millennium Stadium, but only lasted until half-time before a nerve problem in his shoulder forced him off.

Warburton, who has not played a match for 11 weeks, is wary of the threat posed by Australia, and believes his side need to be at the top of their game.

"This is a new experience for me playing a three-Test series," he said.

"Talking to some of the [British and Irish] Lions guys, like Jamie Roberts, they told me it is massively important to win the first game because you can put yourself under so much pressure going into the next two Tests if you lose.

"It is not the be all and end all, because there are still two games left, but it is still a massive factor in winning the series.

"It would be interesting to see how many teams have won a three-Test series after losing the first game.

"I'm sure there wouldn't be too many. I'm sure the odds would be against you, so winning the first game in Brisbane is going to really important."

Wales made it six wins in a row this year with their victory over the Barbarians, however they have not beaten a Tri Nations side away from home for 25 years and last beat the Wallabies on Australian soil in 1969.