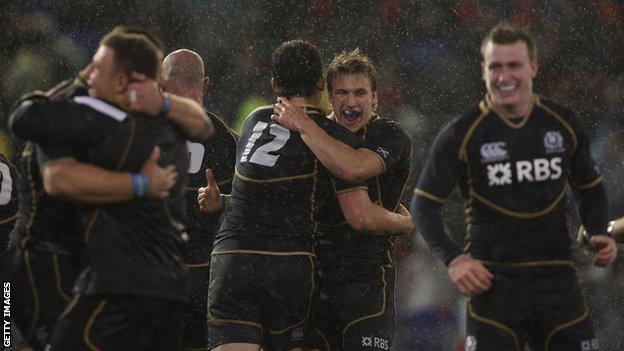 Greig Laidlaw landed a penalty against a fierce wind with the last kick of the game for a stunning 9-6 victory.

"It is very important for the side to show the courage that we showed in defence," said Robinson.

"We couldn't get out of our half after the interval and it needed a huge team spirit from everybody. I thought that was shown in abundance."

This was Scotland's first win of the year and broke a sequence that had run to seven consecutive losses.

And Robinson insisted his side would not get carried away by the result, saying that there was still a lot of work to do if they were to start fulfilling their potential consistently.

"I am just delighted for the players and the management who have worked so hard," he said.

"Also the Scottish supporters because it has been tough for them when the games have been so close and the team has been playing well, getting into good positions to win matches but not achieving that.

"I understand the disappointment, but for this group of players and management, there is a real belief and you saw the team spirit.

"Today our plans in tough conditions worked well but we are going to have to keep improving and keep working hard. I know from the Scottish boys that they are going to do that and that is why they are a delight to coach."

Scotland captain Ross Ford also praised the discipline shown by his team-mates as they held off a second-half onslaught from the Aussies.

"Our tackles and breakdown work were good and we held them out," said the hooker.

"We had to stay disciplined and not give away penalties needlessly. We had to trust in the defence and keep it going.

"It showed in the end that we did manage to break out of our half and into a position where we could attack."

Match-winner Laidlaw, who slotted over three of the four penalties that came his way, admitted to concerns about the atrocious conditions before his decisive kick.

"I was slightly worried about the weather," said the Edinburgh fly-half. "It was messy all night.

"I was just delighted when it went through the posts. It was really a kick for the guys in the scrum because they were absolutely outstanding to force the penalty.

"Defence has won us that game. One to 15, the guys were fantastic. We defended as a team and made a blue wall across the park.

"That's something we talked about and something that I personally have been working hard on."