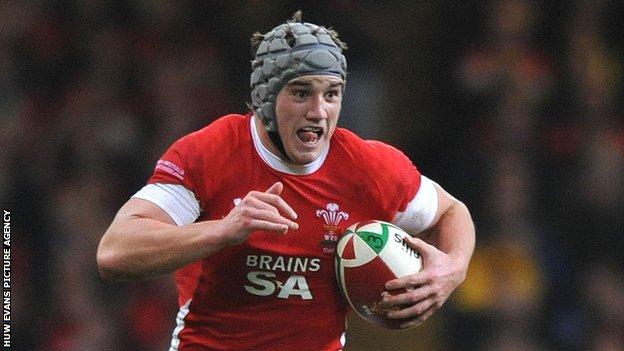 Wales centre Jon Davies is determined to keep the pressure on Australia in Saturday's first Test in Brisbane.

The Wallabies have been criticised at home after their shock 9-6 defeat by Scotland on Tuesday, the Scots' first win in Australia since 1982.

Australia coach Robbie Deans will send out a starting XV against Wales at the Suncorp Stadium showing nine changes.

"We know the importance of the first 20 minutes... to put that seed of doubt in Australia's mind," Davies said.

"They'll be hurting after the loss against Scotland but we've got to make sure that we start with a bang.

"There will be a bit of pressure on them to come out and put in a good performance but... we've got to keep putting pressure on them, not giving them easy ball and mistakes to let them get into their stride."

Davies will be joined in the Wales centres by Scott Williams, given the opportunity to recreate their Scarlets partnership in the injury-enforced absence of Jamie Roberts.

Wales caretaker coach Rob Howley has named a side with four changes from the one that started the Grand Slam decider against France last March.

Ashley Beck, who is named on the bench, was the only uncapped player among 16 frontline players sent as an advance party to Australia before Wales' 30-21 victory over the Barbarians in Cardiff last weekend.

As well as the clean sweep of the Six Nations, Wales also earned plaudits as they finished fourth at the 2011 World Cup.

They were beaten to third place by Australia in a play-off and the Wallabies also won when they visited Cardiff in December.

That is a situation that Davies says Wales are determined to put right, as they have not beaten a Tri-Nations side away from home for 25 years and last beat the Wallabies on Australian soil in 1969.

Wales have not taken a major scalp in the southern hemisphere since beating Australia at the 1987 World Cup in New Zealand.

"With the Grand Slam and what we did in the World Cup... there is a lot of expectation on us and a lot of confidence as well," Davies added.

"What we've achieved over the last 12 months... the next thing for us as a team is to get a big win over a southern hemisphere side.

"You get judged when you come down to these places and how you play out here, and it's a big mark for us moving forward as a team."