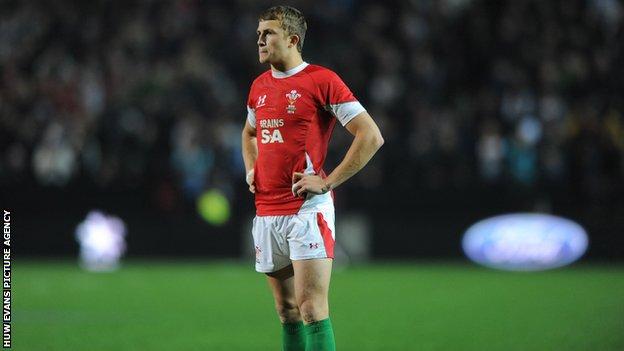 Coach Danny Wilson's side recorded a historic 9-6 win over the reigning junior world champions at the Danie Craven Stadium, Stellenbosch.

Prydie's second half penalty in the driving rain proved the difference between the teams.

New Zealand U20s had not lost in 21 games in the International Rugby Board's annual Under-20s championship and were the reigning champions.

They had cruised to a 63-0 victory over Samoa in their opener and had set their sights on a fifth consecutive world title.

But Wales' stout defence in atrocious wind and torrential rain frustrated the Baby Blacks who famously recorded a record-breaking 92-0 win over Wales in the same tournament last season in Italy.

Mark Taylor, the Wales Under-20s manager, who was in the first Wales senior side to beat South Africa in 1999, did not hide the importance of the victory.

"It was immense," said Taylor. "It is probably one of the biggest wins I have ever been associated with.

"It's just an outstanding result. Whenever you play New Zealand you know you are in for a really tough time

"But the boys played the conditions superbly well, held their discipline and got a tremendous result.

"We are over the moon but know we cannot let ourselves down later on in this tournament by failing to qualify by not beating Samoa."

The Ospreys fly-half, Matthew Morgan, landed one of his four first-half penalties to make it 6-3 to the New Zealanders at half-time.

After the break, the Welsh defence frustrated the Kiwis before Prydie took control of kicking duties from Morgan to land his 65th minute penalty to secure a famous victory.

Wales remain unbeaten in the competition after they beat Fiji 44-18 in the tournament opener. They play Samoa at the University of Western Cape Stadium on 12 June.