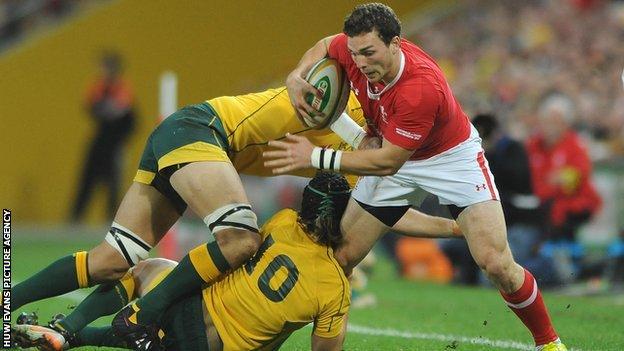 Wales hope George North and Scott Williams will be fit for their second Test against Australia in Melbourne.

The Scarlets wing was replaced after 31 minutes of the first Test defeat in Brisbane suffering a dead leg and will undergo medical assessment this week.

But Wales caretaker coach Rob Howley expects both will return for Saturday's second Test at the Etihad Stadium.

Wales' medical team have stated that North, who has scored 10 tries in 22 Welsh internationals, will undergo "intense treatment" in an attempt to be ready for the visit to Melbourne.

James Hook replaced North in Brisbane and went to full-back as Leigh Halfpenny moved to the wing.

That could be an option for the second Test if North's knock does not respond to treatment during the week.

Howley admitted Williams suffered "a nasty bump to the lip" that required stitches but Wales are hopeful that the Scarlets centre will be fit for selection for the second Test.

"He is okay so that is good for him," added Howley.

Toby Faletau joined centre Jamie Roberts and hooker Huw Bennett on the injury list for the three-Test Australia tour after in Saturday's loss at the Suncorp Stadium.

Gareth Delve has been called into the 34-man squad as Faletau's replacement and the Melbourne Rebels number eight will feature on the bench for their .

Lock Luke Charteris is the only player from Wales' first Test defeat in Brisbane to be retained in their starting line-up for Tuesday's match in Canberra.