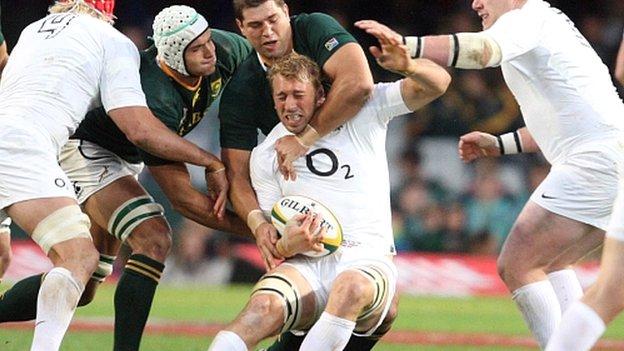 England coach Stuart Lancaster expressed disappointment after the first-Test loss to South Africa, calling it "a game we could have won".

England matched the hosts in the first half in Durban before being overpowered after the break and losing 22-17.

"I was happy with the endeavour and the effort we put in," Lancaster said.

"It was a very positive first half but they put us under real pressure at the start of the second half. It's very hard when they get that momentum."

The score was 6-6 at half-time but England buckled under the Springboks' increased intensity after the break.

Morne Steyn and Jean de Villiers scored tries for the hosts before Ben Foden nicked a try for the visitors at the death.

But the 42-year-old, who was made permanent coach after a successful Six Nations campaign, would not be drawn on any potential changes to his line-up for next week's second Test in Johannesburg.

He said: "It's early days [to be] thinking about next week. We've got a game on Wednesday [against South Africa Barbarians] first and foremost.

"I thought all the subs did well so we'll sit down review it today and tomorrow, pick our side for Wednesday and we'll go from there."

Captain Chris Robshaw said England showed glimpses of their full potential in the closing stages of the match.

"It's all about the result but the last 10 to 15 minutes showed we can put our game on the pitch and move them around," he said.

"We did that throughout the majority of the first half but we've got to start to do it for the full 80 minutes."