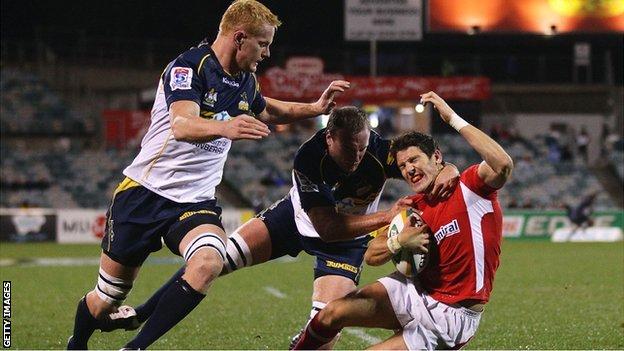 Wales' midweek side beat ACT Brumbies on Tuesday to give caretaker coach Rob Howley plenty to think about for selection ahead of the second Test.

James Hook scored the opening try, kicked well and showed impressive game control, although the fly-half was helped by a dominant Wales pack.

Zack Holmes kicked all Brumbies' points as the home side hit back after the break but Hook's boot kept Wales clear.

Brumbies had struck first with a Holmes penalty after 10 minutes, but were only holding Wales at bay thanks to some committed tackling.

But the tourists were bossing the set-piece in Canberra, Paul James in particular giving rival prop Scott Sio a lesson, and giving the platform for Wales' backline to flourish.

A flowing move took Wales to within touching distance of the Brumbies try line and Hook took lock Ben Hand, skippering Brumbies, on the outside to score before converting his own try.

A thumping tackle from Josh Turnbull saw Brumbies spill possession and Wales pounced on the counter-attacking chance to claim a second try soon after.

A fine angle saw Ashley Beck scythe through the middle of the Australian defence and open-side Tipuric was on his shoulder to ensure another seven-pointer.

Ospreys seven Tipuric was part of a breakaway unit that was making life miserable for Brumbies, who were struggling to gain any quick ball from the breakdown.

Aaron Shingler had played his part in the back-row effort but the Scarlet had to depart to the blood-bin for attention, allowing Gareth Delve to make his first appearance in a Wales shirt for more than two years.

The Melbourne Rebels captain was called into the Wales squad after fellow number eight Toby Faletau broke his hand in the closing moments of the first Test.

Holmes cut the deficit to 14-6 with his second penalty, although the Brumbies fly-half had hit the post with an earlier effort.

But Wales increased their lead thanks to another storming Beck run that saw the Ospreys centre pulled down just short, allowing captain Alun Wyn Jones to pick up and dive over for an unconverted try.

Lock Jones did not emerge for the second half, with Ian Evans coming on for his first tour appearance after delaying his Australia departure to get married.

Wales were also forced into another change as Alex Cuthbert, Wales' try-scorer in the first Test, replaced Aled Brew after the wing felt the effects of a heavy tackle.

Brumbies reorganised after the break and at last started to make some headway against the Welsh defence.

Open-side Colby Faingaa came closest to getting a Brumbies try but while Wales kept their line intact they did concede penalties under pressure.

Holmes punished the visitors with three penalties to bring Brumbies to within four points.

But Wales managed to re-exert some control as the game entered its final stages, allowing Hook to ease the tourists back into a more comfortable winning position with two penalties.