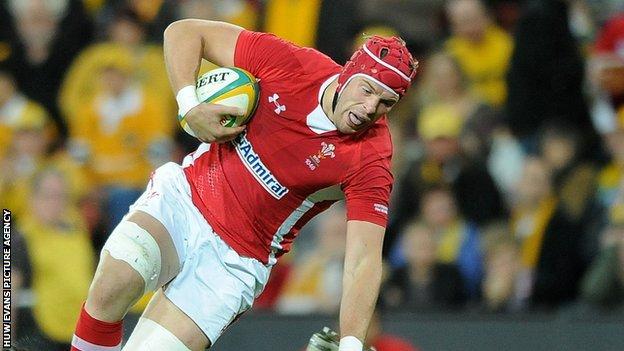 Alun Wyn Jones has told Wales' midweek side that second Test places may be the reward for good displays in Tuesday's tour game against the Brumbies.

The Ospreys second-row to the side that lost the in Brisbane on Saturday.

Only Jones' lock partner Luke Charteris keeps his place in the starting XV.

"[This game] has probably taken a little more significance now after the loss in the first Test," said Jones.

"But it's also a shop window for a lot of the younger boys - and myself - that featured in the to put our hands up and get selected for the next two Tests.

"We're aware there's only this one midweek game, so it's probably the final opportunity for a few of us... but we're relishing the opportunity.

"It's not often you get to play a club side representing your national side, so we're looking forward to it."

The Brumbies have won four of their past five Super 15 games and lead the Australian Conference table by five points.

The also have a great record against Wales, with ACT having beaten the tourists in their previous two encounters 21-20 in Canberra in 1978 and 69-30 in 1996.

"They're on a pretty good roll," Jones admitted. "They're pretty well known in the northern hemisphere so it's going to be an ask obviously but a good test for the youngsters and the squad alike.

Wales caretaker coach Rob Howley has named Gareth Delve on the bench against the Brumbies, after the Melbourne Rebels number eight in the tour squad.

Delve won the last of his 11 caps against Ireland in March 2010 but last faced the Brumbies on 1 June, captaining the Rebels in a 27-19 defeat against their Australian rivals.