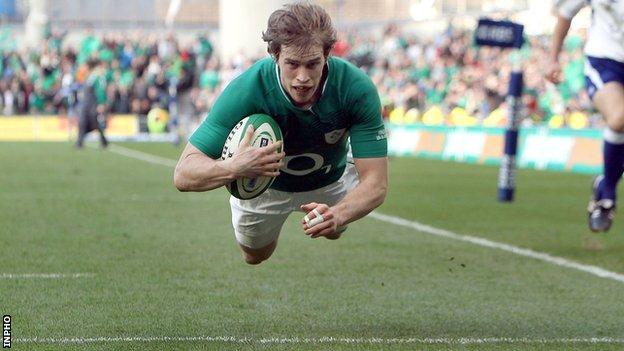 Andrew Trimble and Kevin McLaughlin have been named in an Ireland team that shows four changes for Saturday's second Test against New Zealand.

Ulster wing Trimble replaces Simon Zebo with McLaughlin taking over from Peter O'Mahony in the back row.

Healy picked up a shoulder injury in the game in Auckland but is fit to link up with Ross and Rory Best in the front row.

Coach Declan Kidney has selected 10 Leinster players for the second Test after the drubbing in Auckland.

McLaughlin has been brought in at blindside flanker to replicate the back row that started in Leinster's Heineken Cup final win over Ulster in May.

The coach admitted that Reddan was unfortunate to miss out on elevation to the starting scrum-half role.

Dan Tuohy and Donnacha Ryan resume their second row partnership, with Kidney emphasising the Ulster man's proficiency at the line-out as the primary reason why Donncha O'Callaghan remains on the replacement's bench.

Kidney added that it had been a "close call" between McLaughlin and O'Mahony for the flanker role.

"It is about freshening it up a bit but the fact that Kevin will be part of a back row unit [he has been in] many times before helps.

"Usually a back row will plunder well if the front row are doing well ahead of them."

Captain Brian O'Driscoll is back at the venue where he sustained the shoulder injury that ended his 2005 Lions tour.

Earlier this week, the Irish squad toured parts of Christchurch badly affected by last year's earthquake and they met up with a number of compatriots.

"We were told at training today that every Irish person in the area was trying to get a ticket for the game," said the Ireland captain.

"We'd like to give them something to cheer about too."