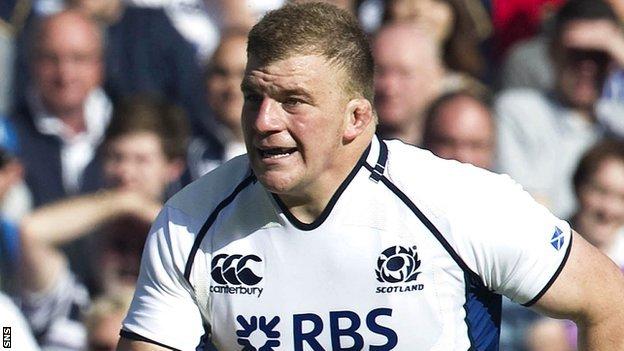 Prop Moray Low has said that Scotland should use their victory over Australia as a platform for their remaining Tests against Fiji and Samoa.

The 9-6 opening win in Newcastle has raised hopes of a second successive winning Southern Hemisphere tour.

The Scots won both matches of their 2010 tour against Argentina.

"The guys like being in a winning way and creating a winning mentality, they're in good spirits from beating Australia," he told BBC Scotland.

"Hopefully now we can build on that going into the next couple of games.

Low was called into the Scotland squad after a shoulder injury forced Glasgow Warriors teammate Jon Welsh out of the tour.

"It was nice to get the call, although I was a bit jetlagged coming back from my holidays. I was pleased to get the call to come out here and be involved in the squad," he said.

And the time of his flight home meant the 15-times capped player was unaware of the Scots' last-gasp win over the Wallabies.

"I was coming back home on the plane, so I didn't actually see it. But it was good to see they got a good win - and some nice conditions to play some rugby in as well."

However, Low is confident that, despite the heat in Fiji, Scotland will be ready for their second summer Test.

He said: "Last week I was in Mexico, and it was rather warm there, so trying to get used to the heat over there, just lying on a sunbed, was a challenge. But the guys we've got here will be able to get us ready with the training that we'll be doing."