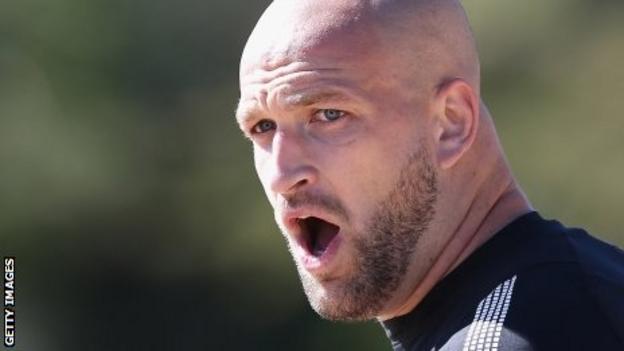 The starting line-up is completely changed from that which lost the first of the three-match Test series in Durban on Saturday.

George has made a great contribution to this tour already, and I know he will captain the team well

Scrum-half Danny Care gets his chance to stake a claim, as does the returning James Haskell at blind-side flanker.

The absence of Jonathan Joseph suggests he could start the second Test.

The London Irish centre or wing came off the bench for the final few minutes in Durban and is a contender to start in either position in Johannesburg on Saturday, with Brad Barritt and Mike Brown both ruled out.

"Jonathan has done well in training and in the opportunities he has had on the field, so he will definitely be considered," head coach Stuart Lancaster told BBC Sport. "But there are also plenty of other people who can play at centre."

Prop Paul Doran Jones, who came off the bench in the first Test, will start at tight-head, while fellow replacements Tom Palmer and Lee Dickson will also perform the same role on Wednesday.

Haskell, who was not considered for the first Test after only linking up with the squad last week after his commitments with Otago Highlanders in New Zealand, will play his first England game since last year's World Cup.

Care will also be champing at the bit after neing dropped for the Six Nations following a series of alcohol-related off-field incidents.

"It has been a long time since my last game and a lot has happened in between so it will be a big relief to represent my country again," Care told BBC Sport. "I feel like I am the new boy again which is a bit weird after being in the squad for four years. I am really glad Stuart has given me the chance to show what I can do again."

Wing David Strettle, who missed the first Test with a calf injury, will hope to prove his fitness with a likely Test wing berth available, Ben Foden set to return to full-back after Brown's unfortunate injury.

Should Foden be retained on the wing, then Saracens full-back Alex Goode's performance will be closely monitored.

"I think he is a great footballer, a great communicator, he has balance in his running and ability to distribute and put people into holes as well," Lancaster added. "It is a tremendous opportunity for him."

Alex Corbisiero, whose return after a biceps operation has been delayed by a jarred knee, is not included. Apart from the London Irish prop, only Harlequins wing Ugo Monye of the 42-man squad will not have featured in the opening two games, though Lancaster said "their opportunity will come."

Robson will be making his senior England debut, having previously featured as a replacement for the second-string Saxons, but his leadership qualities have impressed Lancaster.

"George has had a tremendous season for Harlequins, has made a great contribution to this tour already, both in training and as part of the leadership group, and I know he will captain the team well," the coach added.

Nick Abendanon, who joined the England camp on Monday as a replacement for the injured Brown, took a full part in training and will be on the bench.