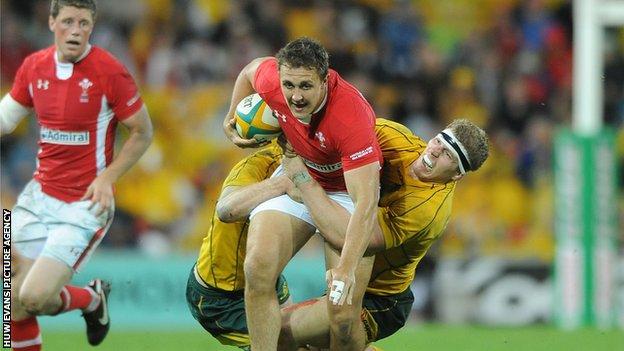 Jonathan Davies still believes Wales have the ability to clinch a Test series victory over Australia despite losing the first Test.

Wales suffered a 27-19 defeat to the Tri-Nations champions in the first Test in Brisbane.

"If they repeat the performances in the Six Nations, I don't see why they cannot come away with a Test series win," said former captain Davies.

Wales face the Wallabies in the second Test in Melbourne on Saturday.

They don't have to be overawed by the Australians. The key is to have the confidence and belief

Davies believes he witnessed enough in Wales' performance, which saw them claw themselves back to 20-19 at one point, to be confident they can still win the three-Test series.

The former fly-half and BBC Wales pundit admits his country's performance was not good enough to deserve a win.

But Davies added he sees no reason why the reigning Grand Slam champions cannot win the two remaining Tests.

"They played poorly but could have won the game," said Davies.

"So they don't have to be overawed by the Australians. The key is to have the confidence and belief after that defeat to know they can play better and win down there.

"On the back of a poor performance, they could have won that first Test."

Wales caretaker coach Rob Howley admitted after the defeat that his team had been second best and had lost the battle at the breakdown.

"The disappointing fact was that they looked very, very rusty," said Davies.

"They know they have to pick the tempo up, pick the intensity up and more than anything believe they can win out there.

"We have to give it everything, but I am convinced that Wales can win one of the Tests and hopefully go and win both of them."