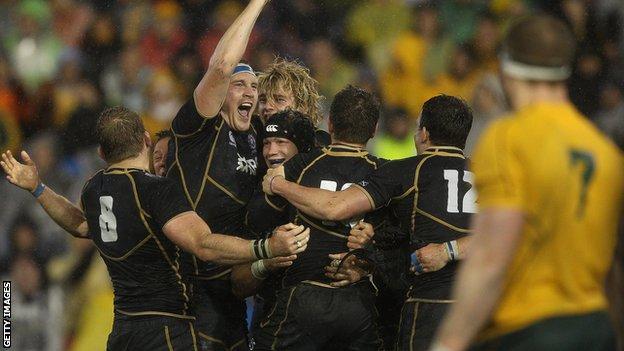 Alastair Kellock believes Scotland's backs can shine against Fiji on Saturday after the forwards gathered all the plaudits for beating Australia.

"We will have specific tactics on when to keep the ball tight," said the Glasgow Warriors lock.

"But also we aim to show the attacking threat that unfortunately we did not get to see because of the weather conditions in Australia.

"We are looking to get those talented backs into the game as well."

Andy Robinson's side ended a run of seven defeats with a 9-6 win in Newcastle but they did not turn round their try-scoring record, although the wet and windy conditions played a huge part.

Scotland only managed four tries during a dismal Six Nations campaign, while they drew a blank in that department in three of their four matches at last year's World Cup.

It is an absolute cliche but it is true: winning is a habit

"The key to playing a team like Fiji is that you don't get carried away by what they are doing," added Kellock.

"It is true that, playing against any team, you have to concentrate on yourself.

"It is about finding our balance and not being influenced by what they are doing.

"We have got to use the momentum from the win in Australia, we have said that already.

"It is Test rugby and each match is going to be different, especially given the contrast in conditions that we are experiencing.

"It is an absolute cliche but it is true: winning is a habit and we kind of got out of it in the last few months."

Scotland's try-scoring potential will be given an immediate lift, with Dutchman Tim Visser available to make his debut under residency rules.

The Edinburgh wing has been the top scorer in the RaboDirect Pro12 for three seasons running and is likely to start against Fiji, with the two wide men who began against Australia both sidelined.

Sean Lamont is still suffering from the rib injury that forced him out of that match just before half-time, while Joe Ansbro has a badly cut eye after a clash of heads with Al Strokosch during the post-match celebrations.

Robinson also has Max Evans to call on when he names his team on Tuesday after the Castres wing joined up with his international team-mates following his play-off commitments with the French club.