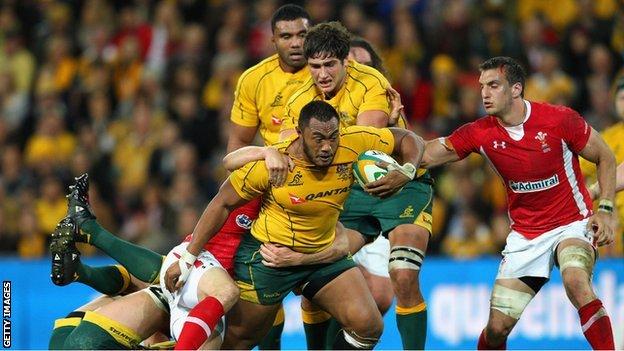 Australia coach Robbie Deans has named an unchanged side for Saturday's second Test against Wales in Melbourne.

The only question mark is over tight-head prop Sekope Kepu, who strained a forearm tendon during the 27-19 first Test win over Wales in Brisbane.

"We are hopeful Keps will be good to go, but we do have a contingency plan in place if we need it," Deans said.

"There are five props in the group we have with us in Melbourne, so we saw no need in bringing anyone extra in."

Ben Alexander, who can play on both sides of the front row and is named as a replacement, is most likely to come into the starting XV should Kepu prove unable to play at the Docklands Stadium on Saturday.

Berrick Barnes retains the number 10 shirt after a much-improved performance against the Welsh than he showed in the surprise 9-6 defeat to Scotland in Newcastle the previous Tuesday.

Kurtley Beale, who along with fellow fly-half options Quade Cooper and James O'Connor missed last week's matches through injury, has not sufficently recovered from his shoulder problem to be considered for selection.

Despite the tourists losing the opening Test, Deans says Six Nations champions Wales will still believe they can level the three-Test series.

"That belief won't have been altered by last Saturday night," Deans says.

"If anything, that game - and more particularly the opportunities that they were able to create within in it - will only have hardened their resolve."

Wales are set to name their team for the second Test at 04:00 BST on Thursday but will definitely have to make a change at eight, after Toby Faletau was ruled out of the tour with a broken hand.

There are also fitness doubts over wing George North and centre Scott Williams, who both had to be replaced during the Brisbane game because of injury.