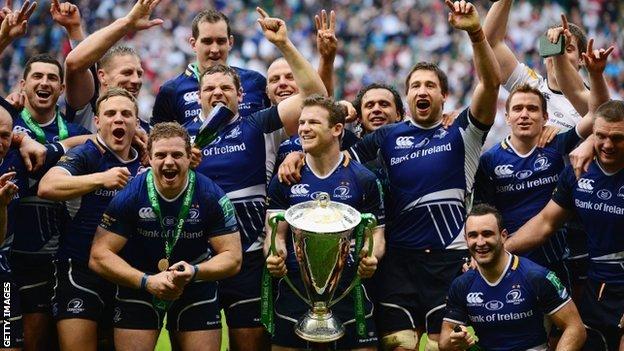 Debutants Exeter will take on defending champions and three-time winners Leinster in the 2012-13 Heineken Cup.

The Chiefs, who qualified by finishing fifth in the Premiership, also face French side Clermont Auvergne and Scarlets of Wales in Pool Five.

Harlequins were knocked out of last season's competition after a 9-8 pool stage defeat by Connacht in Galway.

Last season's semi-finalists Edinburgh take on Munster, who have won the Cup twice before, Saracens and Racing Metro 92 in Pool One.

Ulster, who were beaten 42-14 by Leinster in last season's final, face Northampton, Glasgow and Castres of France in Pool Four.

On Monday, the governing body of England's top rugby union clubs gave notice of its intention to pull out of the Heineken Cup and Amlin Challenge Cup amid disagreements over how the competitions are organised.

French clubs have also threatened to withdraw, but as two years' notice has to be given the move is perceived as an attempt to force others to negotiate.