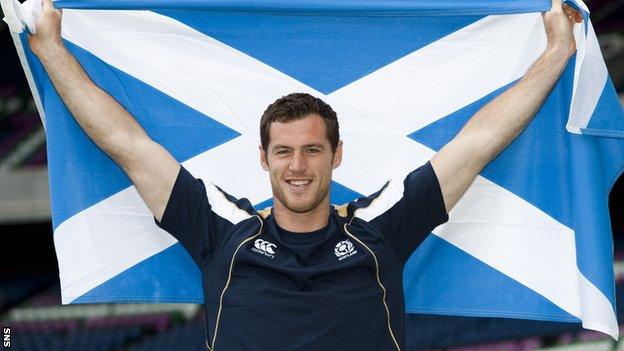 Scotland captain Ross Ford has urged his players to keep their discipline for Saturday's second summer Test against Fiji.

Edinburgh's Tim Visser will make his Scotland debut while fellow winger Max Evans will return to the side.

Dutchman Visser is available for Scotland under residency rules after playing in Scotland for three years.

Injured duo Sean Lamont and Joe Ansbro drop out of the XV that started in the 9-6 win over Australia.

Evans, Richie Vernon, Matt Scott, John Barclay and Ryan Grant are suffering from a sickness bug but are all expected to recover in time.

Ford, who claimed a first win as Scotland captain in the 9-6 defeat of Australia, described the Fijians as 'dangerous' and has warned the Scots not to be sucked into playing the hosts' brand of rugby.

"We have got to make it uncomfortable for them and force them to play from deep, make them do all the work," he said.

"We are playing a structured game and have to keep hold of the ball as much as we can.

Ford also told of his excitement at the prospect of Visser's Scotland debut: "Tim has been outstanding all season, he has got fantastic feet and is very strong.

"He just seems to be able to make things happen from nothing, some of the tries he has scored are almost Fijian-esque.

"I am looking forward to seeing him get the ball in his hands early on and give it a crack to get his confidence going.

Visser, 25, has been the top scorer in the RaboDirect Pro12 for three seasons running and head coach Andy Robinson has taken the first opportunity to blood the Edinburgh star.

"He's been electric on the ball, so we want to get the ball in his hands early," Robinson told BBC Scotland.

Evans missed the clash with Australia because of commitments with French club Castres.

"He has settled in really well with Castres and finished the season in really good form," said Robinson of the former Glasgow flyer.

Given Scotland's disciplined and brave defensive performance against the Wallabies, it is no surprise that the pack remains unchanged.

"I was really pleased with the way the forwards defended around the fringes and the way we set up a couple of the mauls and obviously the way we finished with our scrummaging," explained Robinson.

"That will be important again if we are to set the tone for us to play our way.

"If we get into a game of sevens, Fiji are the best in the world and we will lose - we have to play to our structure.

"We're here to win Test matches, so that's what we're focused on.

"It's a completely different challenge to Australia and we'll have to be at our very best. We enjoyed the win over Australia but that's in the past now."

Although named on the bench, Lamont is still suffering from the rib injury that forced him out of the win over Australia just before half-time, while Ansbro has a badly cut eye after a clash of heads with Al Strokosch during the post-match celebrations.