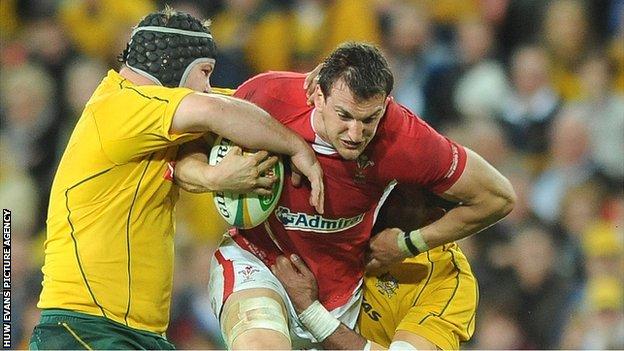 A broken hand suffered by first-choice eight Toby Faletau and the form of rival open-side Justin Tipuric could force the Wales management's hand.

"Sam can be quite effective for us from an eight position," McBryde said.

"He's very effective as an open-side as well but... someone like Justin Tipuric comes into the reckoning."

Tipuric did not make the match 22 for the first Test defeat in Brisbane, but was outstanding in Tuesday's 25-15 win against ACT Brumbies in Canberra.

Warburton has been in fine form himself this season, but last Saturday's loss to the Wallabies was his first game since injuring a shoulder in Wales' Grand Slam decider with France last March.

Australia captain David Pocock edged skipper rival Warburton in the battle of the open-sides and the inclusion of Tipuric in Melbourne on Saturday could tip the odds back Wales' way.

Although Warburton has emerged as one of the outstanding sevens in world rugby, he was a regular eight as he came up through Wales age-group rugby and has also featured there for the senior side.

"We've certainly got to consider it, he has played there before," McBryde added. "I know that we used him as a number eight back in 2009 on the America-Canada tour.

"There's a bit of heat on the captain at the moment without doubt.

"His [Tipuric] form at the moment warrants certainly a place in the match 22, if not a starting place.

"The effect he's had in the last two games as well as his performances for the Ospreys, he really does stand out so at the moment he's giving us a bit of a headache."

Fly-half James Hook, who came on at full-back in the first Test, also impressed from fly-half against Brumbies to press his case for a starting spot.

Wales are confident wing George North and centre Scott Williams will be fit for Saturday's second Test in Melbourne despite suffering injuries during the first Test.

An ankle knock suffered by Alex Cuthbert which forced the wing's departure during the win over Brumbies was "nothing untoward".

Australia coach Robbie Deans has named an unchanged side for the second Test while Wales will name their team at 04:00 BST on Thursday.