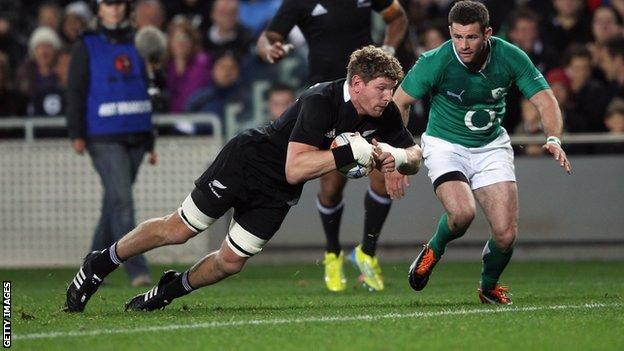 New Zealand have made one change for Saturday's second Test against Ireland in Christchurch with Adam Thomson replacing the injured Victor Vito.

Blindside flanker Thomson scored a try in last weekend's 42-10 win over the Irish after coming on as a replacement.

Thomson's place on the bench is taken by the uncapped Sam Cane.

"We expect Ireland to improve as they have a 'never-say-die' attitude, so what we did last time won't be good enough," said head coach Steve Hansen.

"Once again, for us it's about our preparation, getting clarity early in the week and building in intensity so we can have a performance we can all be proud of on Saturday.

"We (the coaches) are expecting further improvements in our game due to the extra training and preparation time we have had together, along with having a game under our belt."

It will be the first test in Christchurch since 2010, following a devastating earthquake in February last year that killed nearly 200 people and destroyed much of the central city.

"It's great that Test footy has returned to Christchurch and the players are looking forward to playing in front of a sell-out crowd," said Hansen.

"The team, especially those of us from Christchurch, know that people have still been doing it tough so hopefully we can give them a performance on Saturday that puts a smile on their faces."