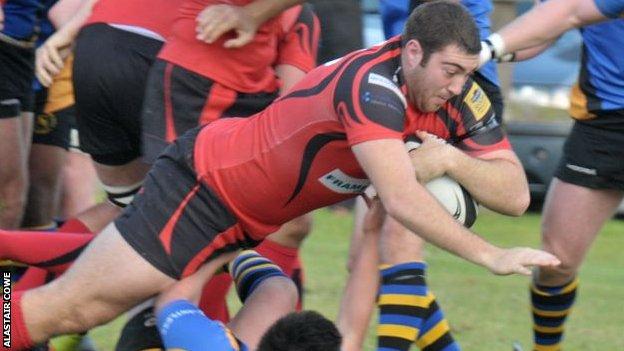 Redruth boss Adrian Edwards says he is confident that captain Craig Bonds and last season's top try-scorer Tom Duncan will stay at the club next season.

The club have re-signed 19 players for next season including scrum-half Greg Goodfellow and prop Darren Jacques.

And Edwards says he expects Bonds and Duncan to join them.

"I'm really confident, having known these people I can't imagine too many of them are going to drift away," he told BBC South West.

You need these people at the club, they're at the heart of everything, the young lads look up to them, people in the community want to see them play and I'm convinced that they will stay

Head coach Edwards begins his first season in charge at the Rec after taking over from veteran director of rugby Dave Penberthy and says he expects most of last season's squad to stay on for the 2012/13 campaign.

"I work with Craig Bonds and I'm pretty certain these people will sign, I talk to people every day.

"We had a meeting a couple of weeks ago and people were given contracts and people go away and read them and sign them in due course.

"I haven't worried too much, I keep in touch with all the players, I see them training in the gym and I'm pretty hopeful they'll all commit and stay with us."

And he says it is key that the club's established players stay to help bring through the next generation of Redruth players.

"It's really important, they're the heart of Redruth and it's very important that those players stay.

"We've got a lot of young players coming through now and Redruth has been built on their colts section and people being at the club.

"These youngsters are going to learn from some quality players.

"You need these people at the club, they're at the heart of everything, the young lads look up to them, people in the community want to see them play and I'm convinced that they will stay."