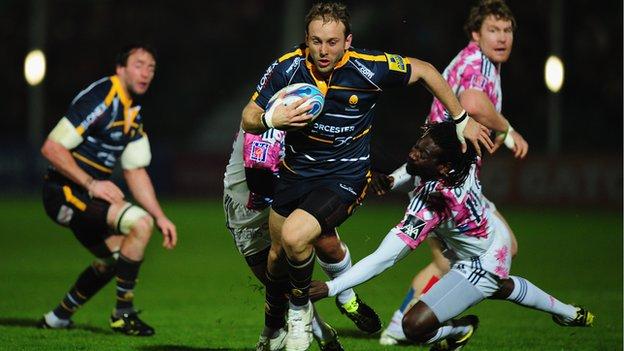 The Warriors face a trip to north eastern Italy to take on Rovigo, as well as a visit to Basque country to face Bizkaia Gernika.

But the highlight is the meetings with seven-time French champions Perpignan, Heineken Cup runners-up in 2003.

"They are one of the giants of French rugby, so that's a very attractive fixture," Hill told BBC Sport.

*Newcastle Falcons' participation is subject to an appeal to the Rugby Football Union by London Welsh.

The first round of matches will be played between 11-14 October.

"It's a superb place to go to play down in Catalan country, where they are very passionate about their rugby.

"Normally, they're one of the most powerful teams in the French league and will be desperate to win that championship so we really couldn't have asked for a better fixture.

"We're delighted with the draw and I really don't think it could have been any better for us."

Perpignan boast a host of top players in their ranks, including Welsh international pair James Hook and Luke Charteris, as well as Worcester-born Luke Narraway, who joined the French club from Gloucester.

Hill senses echoes of last season when Worcester were in the same group as Stade Francais.

"We just failed to beat Stade here at Sixways although it was a close-run thing but we'll be a better team next year," he promised.

"I hope we can really have a good go at Perpignan as the French are not normally known for their good performances away from home.

I hope we can really have a good go at Perpignan. The French are not normally known for their good performances away from home

"If we can get them on a good night up here at Sixways and beat them then that would give us a real chance to go to Perpignan and get through."

While accepting that both Worcester and Perpignan will be expected to comfortably see off the Italians and Spanish, Hill insists they will be taking nothing for granted.

He added: "When you're playing an Italian team and particularly a Spanish team you'd be expected to go and get a bonus-point victory home and away.

"Those wins don't come easy. We had to work for our win in Bucharest last year, so you can't afford to take them lightly."