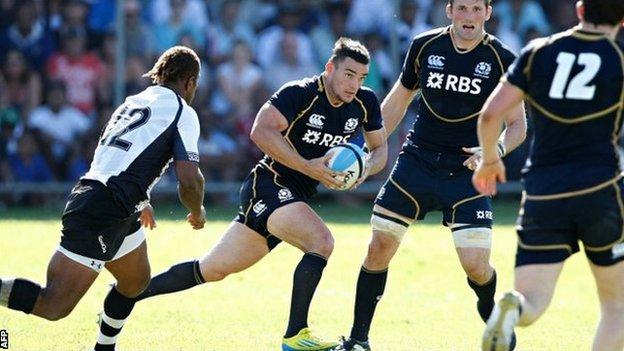 Two tries from Tim Visser on his international debut helped Scotland on their way to victory over Fiji.

In the scorching heat of Lautoka, a try from Greig Laidlaw and Visser's first, with a penalty try in-between, eased Scotland to a 24-11 half-time lead.

Scores from Waisea Nayacalevu and Metuisela Talebula after the break, added to Josefa Domolailai's first-half try, got Fiji back in the tie.

However, Visser went over eight minutes from the end to secure the win.

With the fierce mid-afternoon temperature taking its toll, the Scots had to dig deep to see off a determined Fijian opposition.

It was Fiji who started the better and Jonetani Ralulu knocked over two penalties as the Scots faltered in the face of some big hitting.

The perceived wisdom prior to kick-off was that Scotland would dominate in the forwards and a driving maul gave them good field position.

From a breakdown just a few metres out Laidlaw dived over for the Scots first try and added the conversion from in front of the posts.

With the Scots again in Fijian territory, the home side conceded a penalty and Scotland opted to go for the scrum five metres out from the home line.

The Fijian scrum buckled and South African referee Jaco Peyper awarded a penalty try to Scotland, Laidlaw with the simplest of tasks to add the extra two points.

Fiji, galvanised by those two visiting tries, then went close from a long line-out throw that led to an attack which Al Kellock and Mike Blair did well to frustrate.

The home crowd recognised a score was imminent and Domolailai obliged with a try after a break from Nikola Matawalu. Ralulu missed the conversion.

Both teams were threatening with some enterprising attacking: Visser prominent with some strong running, while in defence Max Evans stopped Watisoni Votu with an excellent tackle.

Laidlaw added another penalty struck from the Fijian 10 metre line.

Scotland centre Nick De Luca claims to have touched the ball only once in the previous win over Australia, which was played out in atrocious wet conditions.

The Edinburgh man was more involved this time and it was his miss-pass which sent in Visser for his first Scotland try. Laidlaw added another conversion and Scotland were 13 points clear at the interval.

Scotland were first to register in the second half, with Laidlaw adding another penalty but it was then that Fiji really started to threaten.

The Scots were adjudged to be offside five metres out and it was Nayacalevu who eventually breached the Scottish defence, breaking through despairing tackles from Blair and Visser.

Ralulu found his kicking boots again and slotted over the conversion.

Their second try of the half saw Talebula released into acres of space; he wrong-footed full back Stuart Hogg and dived flamboyantly over the line. Ralulu added the conversion and Scotland were creaking.

Laidlaw added a penalty to steady the Scots and Visser put the seal on a characterful win, his strength allowing him to shrug off the defence and run in under the posts after the home side had failed to deal with a high kick from Matt Scott. Laidlaw added the conversion.