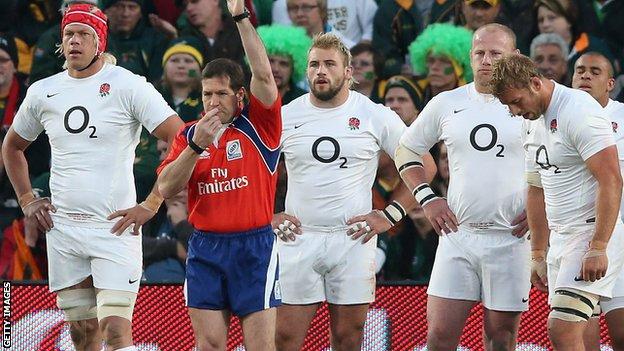 South Africa withstood a brave second-half fightback from England to clinch a series victory in a thrilling encounter in Johannesburg.

All hope seemed lost for the visitors as tries from Willem Alberts, Bismark du Plessis and Francois Hougaard gave the hosts a 25-10 half-time lead.

Two opportunist converted tries from the lively Ben Youngs dragged England back to within a converted try.

But a wonderful try from JP Pietersen secured a nail-biting win for his team.

South Africa were relentelss in the first half, pulverising any white-shirted visitor who stood in their way, and it seemed a ninth straight victory over England would be achieved with ease.

The tactics were simple but effective from the hosts and their intensity proved too much for a shell-shocked England who did not help their cause with needless errors at the line out and scrum.

As ineffective as the visitors were before the break, however, head coach Stuart Lancaster will be encouraged by the resolve his men showed in the second half.

It did seem as if Stuart Lancaster's men had no realistic hope of becoming only the fourth team to beat the Boks at Ellis Park since 1993.

An England error resulted in the opening try. Youngs had put in at the scrum, but the ball fizzed through the other side to allow Alberts to saunter over the line.

Morne Steyn missed with the conversion but the South Africans were ruthless with ball in hand, Du Plessis barging over to leave Youngs, Toby Flood and Jonathan Joseph dangling by his coattails in vain.

JP Pietersen has such quick, dancing feet. It was a mesmerising run, fantastic to watch and he deservedly scored in the corner. South Africa had the patience and the experience to go through the phases and go to the right through simple attrition. It was a wonderful run, not just to grace this game, but any game. To beat three layers of defence was special.

Ben Foden made the most of rare England possession with a burst through midfield which resulted in an easy penalty for Flood, but Steyn soon made it 15-3 when Dylan Hartley was penalised at the scrum, before Hougaard dinked over to keep the scoreboard ticking in the hosts' favour.

Trailing 22-3 after 18 minutes, the livewire Youngs threw caution to the wind with a quick tap penalty and the supporting Chris Ashton fed Flood who galloped over for his fourth international try.

Flood converted for 22-10 but South Africa's response was to work their way into opposition territory once again, which allowed Steyn to bisect the posts with a drop-goal to give the hosts a commanding 25-10 lead at the break.

South Africa could have led by more before the whistle had Pietersen not knocked on within a metre of the line and had both Steyn and Frans Steyn not missed a penalty each.

It seemed it would matter little until England burst into life after the break thanks to Youngs who scored twice within 10 minutes.

The first was an well-taken try from the line-out and the second a dash over the line after good work from the forwards.

England were in the ascendancy and enjoying plenty of possession. When Flood booted over to reduce the arrears to four points and Steyn's penalty hit the posts in the 67th minute it seemed as if the rugby Gods might be smiling on Lancaster's men.

But Pietersen quickly stamped out such fanciful thoughts as the winger's coruscating run from inside his own half had the visitors on their heels, and the men in green recycled out wide to allow the winger to finish his good work.