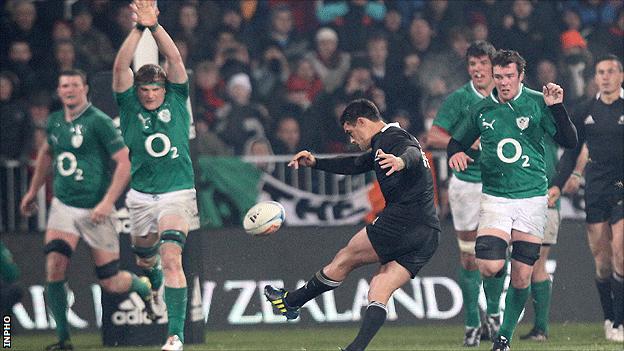 Disappointed skipper Brian O'Driscoll said he was proud of Ireland's display in their agonising 22-19 defeat by New Zealand in the Saturday's second Test.

With the scores locked at 19-19 after 79 enthralling minutes, Dan Carter's drop goal scraped over to give the world champions a narrow victory.

"We got back on level terms and to concede the way we did was disappointing," said O'Driscoll.

"Our display was hugely improved from last week and I'm proud of the lads."

Having been overpowered 42-10 in the first Test in Auckland a week earlier, a rejuvenated Ireland came close to avioding defeat in New Zealand for the first time.

"We let ourselves down in the first Test and we spoke about that, we spoke about the jersey and concentrating on our own game, but the scoreline still says an All Blacks win which is difficult to take considering the effort we put in," added O'Driscoll.

Ireland coach Declan Kidney refused to single out any of the decisions that went in New Zealand's favour following Israel Dagg's trip to the sin-bin.

He said: "We are just trying to work on what is under our control. We will have a look at it this week, but will only be focusing on what we can control."

Kidney praised the performance of scrum-half Conor Murray, Ireland's try-scorer, and insisted there was more to come from the 23-year-old.

"He had the confidence to play a bit more tonight. He showed that with the opportunity that he took.

"His selection was a tight call and Eoin Reddan did well. We'll just have to see how guys pull up during the week."

While Ireland were disappointed, New Zealand skipper Richie McCaw was relieved to get away with the win.

"We made mistakes, let them get momentum and that went against us. We gave the ball away but at the end we are happy," said McCaw.

"We have got things to work on, but we recovered our composure, forced a mistake and got the win."