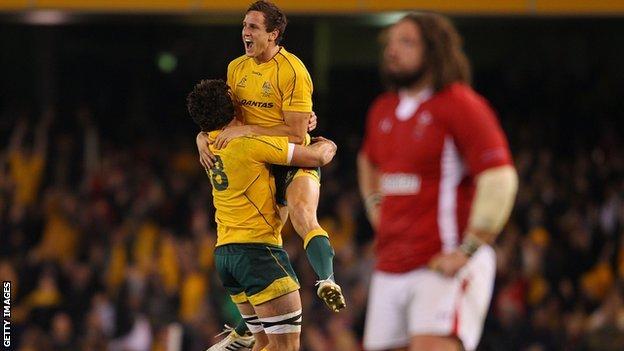 Adam Jones admits Wales have themselves to blame for wasting their best chance of beating Australia on their own patch for the first time in 43 years.

Wales looked set for their first win in Australia since 1969 when Mike Harris' added-time kick snatched a thrilling for the Aussies.

Wales' George North and Jonathan Davies scored tries as the tourists led for most of the game in Melbourne.

But Jones said: "We gave them a chance to get upfield. It's our own fault."

Wales led 23-22 with a minute remaining but Rhys Priestland kicked away possession of the ball and were driven back to their own 22.

The 2012 Grand Slam champions were penalised by referee Chris Pollock for a collapsed maul and Harris's composed kick secured Australia an unassailable 2-0 lead in the three-Test series.

The replacement fly-half, who replaced injured kicker Berrick Barnes just moments before, cooly stepped up to convert the last kick of the game as Australia extend their winning run over Wales to six matches.

"They're a good side, they don't stop working and they know how to win these games," said British and Irish Lions prop Jones.

"It was a perfect chance for us to level the series and perhaps we should have. Again, a silly penalty gave them a chance for a driving line out."

Wales full-back Leigh Halfpenny kicked 13 points but Rob Horne's try and 17 points from the boot of Berrick Barnes ensured Australia were always in touch so Harris could be the Etihad Stadium hero.

"One lack of concentration cost us," continued Wales centre and try-scorer Davies.

"You can't be handing Australia easy penalties and points like that, we're not going to get victories down here if we just give them easy points.

"We'll take the lessons from it and our performances are getting better.

"But if we're being real harsh it wasn't good enough. We gave Australia possession and an opportunity to win the game, we should be better than that."

The lead changed 10 times in a compelling game in Melbourne but the reigning Tri-Nations champions punished Wales for their indiscipline.

"We were quite clinical when we had the ball and took our opportunities," said Wales caretaker head coach Rob Howley.

"But we gave them one too many opportunities. It's a pretty quiet dressing room. I'm immensely proud of the effort of the 22."

Australia captain David Pocock hailed a "fantastic Test match" and praised the visitors for holding the Wallabies to their narrowest winning margin over Wales in Australia since 1978.

"I'm proud of our boys for holding it right to the end," said Pocock. "Credit to Wales, they're a fantastic team and they showed that."