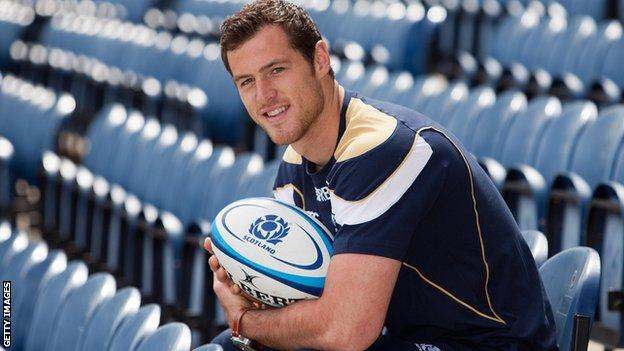 Tim Visser made it a Scotland debut to remember with two tries in a bruising 37-25 win in Fiji.

"It's an amazing feeling," said the Dutch winger, who qualified for his adopted home under residency rules.

"Getting the win was the most important thing and I'm delighted with two tries.

"Beating Fiji on their home turf is great. Every time they got ball in hand they looked dangerous. We had to follow up Australia with win now want three from three."

Scotland take on Samoa next and will need to improve on a second-half showing that allowed Fiji right back into the game, although the heat and humidity in Lautoka may have sapped the visitors.

"There was a lot of good rugby but also a lot of stuff that we said we wouldn't do," added Visser, who sealed the victory with a late score.

"We turned the ball over a lot. It showed how dangerous they are ball in hand that every time they got a turnover, we were under pressure.

"That is something we did not want to do, we will take the good points from this but there is still a lot to work on."

Head coach Andy Robinson was satisfied with Visser's first Scotland outing but was concerned by defensive lapses in the four-tries-to-three victory.

We showed a lot of character. We were under a lot of pressure and we came through it

"I'm pleased for him," he said of the Edinburgh star. "The first one was a cracking try.

"The last time Scotland came here with a very good side and lost heavily. The good thing is that we did win the game and scored 37 points.

"Greig Laidlaw's as well, from the way that we moved the ball, but we cannot allow sides to come back into the game. If you do that, you will get punished.

"Our defence was disappointing in the second half because we sat off them and it was only in the last 15 minutes that we started to put the hits in.

"If you give these teams space, they're fantastic offloaders

"As soon as we went forward we put Fiji under pressure

"But we showed a lot of character. We were under a lot of pressure and we came through it."

Robinson also had words of encouragement for the way Fiji had gone about their business.

The home side put in some ferocious tackles and attacked with flair when the opportunity arose.

"When you see opposition players play like that, when you see Netani Talei lead the team as well as that, and their nine was exceptional, it means we are delighted to get the result but Fiji should be delighted with the way their team played," said Robinson.

"I have watched a lot of their rugby over the last three weeks and I think that if they can play like this all the way through they are going to be a dangerous side."