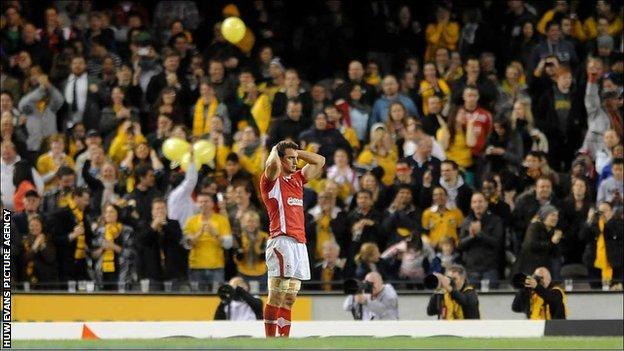 Sam Warburton has told his Wales team to "learn the lessons" of their after Australia broke Welsh hearts with the final kick.

Wales looked set to beat the Wallabies in Australia for the first time since 1969 in Melbourne on Saturday before Mike Harris's dramatic late penalty.

But Warburton was frustrated that Wales fly-half Rhys Priestland kicked away possession with a minute remaining.

"The plan was to keep the ball," admitted the Wales captain.

I don't think you can get much closer than that. I am absolutely demoralised to come so close

"As the ball was kicked I remember Ryan Jones shouting 'No' at the top of his voice, it wasn't what the forwards were planning.

"It is a difficult one because there is a chance of the referee penalising us and it was still within kicking range for Australia so I can understand why the backs might have wanted to kick it.

"But from a forward point of view I would have wanted to back our contact skills and keep the ball as we have done successfully before.

"Hindsight is a great thing but that is what we should have done. I think a little bit of composure and patience was what was needed.

"I thought we had learned the lessons of that when we lost against the Barbarians last summer and as captain I said to myself I wouldn't let that happen again.

"But it did so obviously the message wasn't clear enough."

Australia now have an unassailable 2-0 lead in this three-Test series but Warburton insists the narrow defeat will motivate Wales, the 2012 Grand Slam champions, ahead of Saturday's final Test in Sydney.

"We're not the sort of players to put our heads down and not front up again next week," said the Cardiff Blues openside.

"We've always shown character and the result will probably drive us and motivate us even more to ensure we get a result. I don't think it will be hard to lift the players.

"We don't want to get on the plane home losing the series 3-0 as we know we don't deserve it and we're much better than that. We're desperate to get a scalp out here."

Wales suffered an agonising narrow defeat by France in the 2011 Rugby World Cup semi-final and the hurt inspired Wales to their third Six Nations Grand Slam in eight years.

"The players will have to remember the date and the time," Howley said.

"Similar to the semi-final defeat to France, you must come back a better player as it is all about mastering those moments in Test match rugby like we've done previously, particularly in the Six Nations."