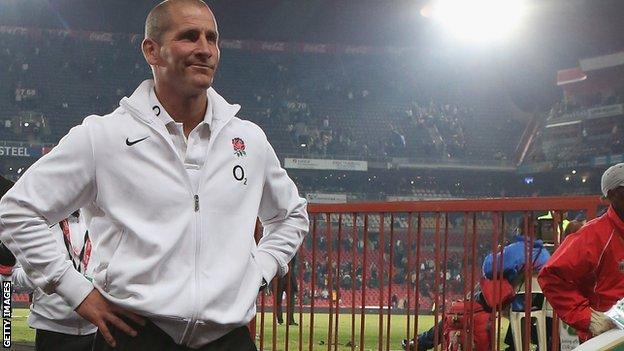 England head coach Stuart Lancaster described his team's 36-27 defeat by South Africa as frustrating but insisted he was proud of his players.

The visitors trailed 25-10 at half-time after being overpowered by the hosts, but rallied to ensure a nervy finish.

"It was tight. The boys are frustrated but we've got to bottle that frustration," said Lancaster.

"The try gave us the confidence. We grew, the scrum got better and we started to win collisions."

The victory was South Africa's ninth consecutive win over England and ensured the Boks take an unassailable 2-0 lead into the final game of the series in Port Elizabeth next week.

Toby Flood scored near the posts and then converted to reduce the arrears but Lancaster admitted his team were "hanging on by our fingernails" in the first half.

"We were disappointed with the start, to give them 12 points before we got going," he said.

England's performance improved considerably after the break, with the lively Ben Youngs scoring twice to give the visitors hope before J P Pietersen finished a wonderful move to ensure victory for South Africa.

Lancaster added: "We know we've got to be better in all the little details that make the difference in winning at international level. Before half-time was the time we needed to get a foothold in the game."

The match pitted the experienced hosts against a developing English side, in which centre Jonathan Joseph and fly-half Alex Goode made their international debuts.

Despite the result, Lancaster was keen to highlight the value of the experience gained by his players.

"We have a young and developing side that has come to this iconic stadium [Coca-Cola Park - formerly Ellis Park] and played a quality side. There are a lot of positives to take," he told BBC Radio 5 live's Sportsweek.

"We are in a great place going forward thanks to the culture and environment within the squad, and the young players coming through.

"The South Africa side had more than 500 caps between them. There have been one or two new additions, but generally, they are used to playing together.

"Our lads have come together with just over 200 caps, with a lot of lads who are in single figures for caps.