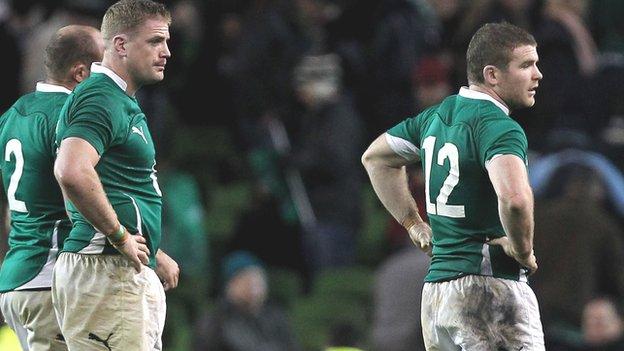 Ireland centre Gordon D'Arcy and number eight Jamie Heaslip will miss next Saturday's third and final test against New Zealand because of injury.

D'Arcy, who limped off with a calf injury in Saturday's 22-19 defeat, will return home, with Ulster centre Paddy Wallace taking his place in the squad.

Heaslip broke his right index finger during the Christchurch match.

Captain Brian O'Driscoll and Mike Ross are expected to be fit for the Hamilton Test after sustaining facial injuries.

Scans were "clear" for both players, a boost ahead of the game at Waikato Stadium.

Ireland have adequate cover in the back row and will not draft in a replacement for Heaslip.

New Zealand have already taken the three-match series, having won the first test 42-10 in Auckland, before an 80th minute drop-goal from fly-half Daniel Carter gave them victory at a freezing Rugby League Park on Saturday.

The All Blacks have yet to experience defeat against Ireland in 26 Tests, dating back to the first match in 1905.