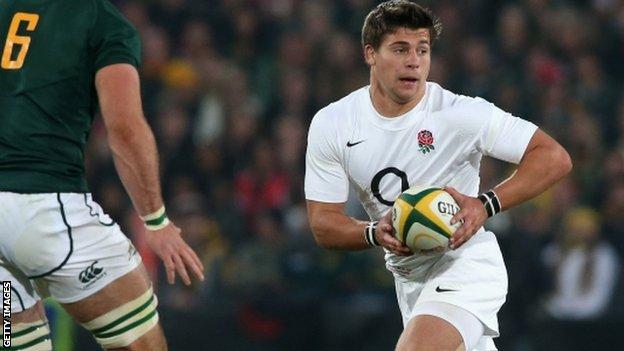 Scrum-half Ben Youngs will miss the remainder of England's tour of South Africa with a shoulder injury.

The 22-year-old Leicester Tigers player, who scored two tries in Saturday's 36-27 second Test defeat in Johannesburg, will be replaced by Harlequins' Karl Dickson.

Dickson, 29, will join the tour in time for Tuesday's match in Potchefstroom.

England play the Springboks in the third and final Test of the series in Port Elizabeth next Saturday.

Youngs's performance in Johannesburg inspired England's revival after they fell 28-10 behind.

England head coach Stuart Lancaster said: "He didn't present his injury until the end of the game. When we got back, he was struggling to move it.

"From our point of view, he was excellent for us in the second Test. He really played well and he is devastated."

Youngs was withdrawn six minutes from time and replaced by Lee Dickson, Karl's brother, but showed no signs that he had damaged his right shoulder after the game.

Care was dropped for the Six Nations by head coach Stuart Lancaster after a series of off-field incidents.

The 25-year-old impressed in an England XV victory over a southern Barbarians side in Kimberley last week and could now be ready for elevation to the senior side.

Lancaster added: "It won't be any disruption. Both Danny and Lee know the game plans."

Flanker Alberts (knee) and full-back Lambie (ankle) both picked up injuries in Saturday's win and will be assessed in the coming week.

Centre Francois Steyn definitely misses out because the match clashes with his wedding day.