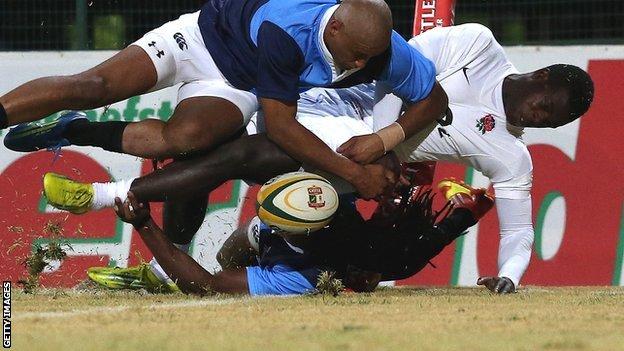 England led 31-10 at the break as Ben Morgan added to Abendanon's treble.

The hosts - who had scored the game's first try through Joubert Engelbrecht - scored twice after the break through Shaun Venter to cut the lead to seven.

Jonny May scored a brace and Anthony Allen went over and although Deon Scholtz replied with a consolation, the visitors concluded with a penalty try.

There was a worrying note for England when winger Ugo Monye was taken off on a stretcher after knocking himself out trying to tackle a Barbarians player, although he looked to have regained consciousness as he was helped from the field.

Tuesday's match was largely about adding to the international experience of the youngsters on the fringes of the England squad, and their inability to shut down the hosts early in the second half will have given the new faces plenty of food for thought.

But in the short term a bigger talking point was the absences from the XV on show in Potchefstroom, which may well prove significant when the team is named for Saturday's third Test against South Africa.

Scrum-half Danny Care and number eight Thomas Waldrom were both rested, suggesting they are in contention to start in Port Elizabeth, while the loss from the tour through injury of captain Chris Robshaw means the open-side flanker's shirt is up for grabs in the third Test.

Young Bath back rower Carl Fearns produced a rumbustious display in the seven shirt in the first half to push his international claims, while Lee Dickson at scrum-half kept the tempo high as he tried to convince Stuart Lancaster he is the man to fill in for the injured Ben Youngs on Saturday.

A penalty apiece from JC Roos and Charlie Hodgson made it 3-3 before the hosts scored the first try of the game, number eight Nicky Steyn drawing Monye and sending Engelbrecht over in the corner, with Roos converting from the touchline.

England hit back as Abendanon scored in the corner and four minutes later Morgan drilled over from close range.

The tourists added two more tries before the break as Abendanon completed his treble to make it 31-10, Hodgson adding the extras to all four scores on his way to seven conversions in the match.

It looked as though the game was over as a contest but the gutsy hosts refused to lie down and a quickfire double from Venter, both converted by Roos, saw them trail by only seven points.

England, who had lost Jamie Gibson to the sin bin, managed to reassert their authority and May - on for the injured Monye - confirmed his finishing ability with two tries of his own.

Allen, playing at outside centre, capped off an industrious display with a try before the lively Scholtz grabbed a deserved score for the hosts.

But the young Englishmen finished off proceedings with a penalty try as the power of their scrum proved too much for their South African hosts.