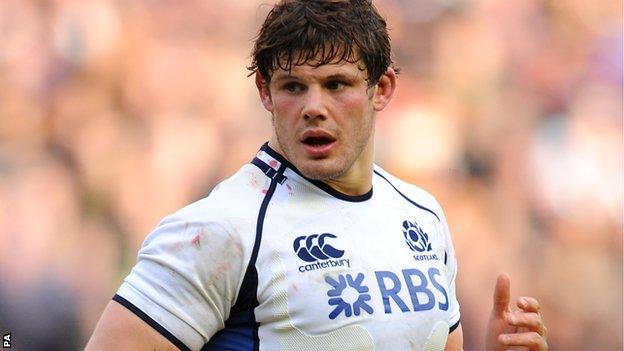 Scotland captain Ross Ford believes his team can make it three wins out of three on this year's summer tour by beating Samoa in Apia on Saturday.

The Scots began their campaign in the southern hemisphere with a 9-6 win over Australia and then defeated Fiji 37-25.

Ford insists a 100% record was always the target for Andy Robinson's men.

"We came down here to win three Tests; we've done the job so far on two. Everyone's keen to get on with the tour and finish on a high," said the hooker.

Scotland will be without the services of number eight John Barclay for the final game, against the world's 10th seeds.

The Glasgow forward has left the tour party in order to return home to assist with planning for his wedding next month.

Ford's team-mate at Edinburgh, Tim Visser, notched up two tries on his debut against the flying Fijians and his skipper knows that Scotland have unearthed a talent with great potential.

"He's worked hard this season. Obviously he and Nick [De Luca] have that understanding of what they're looking for," said Ford.

"He was able to finish off the opportunities he was given and that's what he's been doing all year. He's continued that for Scotland so it's good."

One of the undoubted strengths of Scotland on the tour has been the performance of the pack.

This was highlighted at the weekend when the Scots were awarded a penalty try when going for a pushover from the scrum and Ford believes that this says a lot about the Scots' confidence.

The captain added: "The previous couple of scrums had felt good and Euan Murray felt confident.

"I thought, 'why not?' We talked about it all week going for the double shove, I thought it was about time we tested that out. After the first few against Fiji, let's have a bash at it."

Robinson names his team for the third Test at 18:30 BST on Tuesday.

If the Scots are successful in Apia at the weekend it will be only the second time that they have enjoyed a winning tour in the southern hemisphere.

The last time that happened was in 2010 in Argentina when the Scots won both Tests against the Pumas.