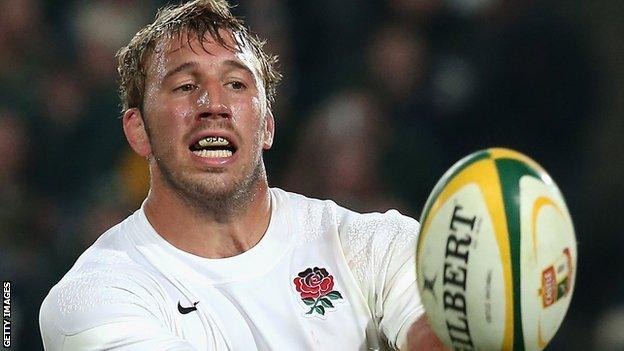 Robshaw, 26, was originally injured during the first Test defeat and took a second blow to the thumb during Saturday's 36-27 loss to the Boks.

X-rays have revealed the full extent of the damage and Robshaw said: "I'm absolutely gutted - it's a difficult way to end the season."

Hooker Dylan Hartley will captain the side in Saturday's final Test.

The news comes a day after scrum-half Ben Youngs was ruled out of the remainder of the tour with a shoulder injury.

"Chris, as you would imagine, is devastated," said England head coach Stuart Lancaster.

"He has led us superbly in the last seven internationals and been one of our stand-out performers. But the medical advice is that he should not play and we have to trust that expert opinion."

It is a disappointing end to what has been a stellar season for Robshaw, albeit one that started on a low.

He was left out of England's squad for their dire World Cup campaign but became captain for the start of the Six Nations, and also led club side Harlequins to the English title while being voted Premiership player of the year.

Robshaw added: "I've been very proud and honoured to lead this group during the Six Nations and on this tour.

"I know the lads can raise themselves for tomorrow [Wednesday] and Saturday and I will be doing everything I can to support them."

England have made two changes to their line-up to face South African Northern Barbarians on Wednesday which could prove significant for the Test team, with Thomas Waldrom and Danny Care both rested.

After losing the opening two matches England go into Saturday's Test in Port Elizabeth looking for their first win over the Springboks since November 2006.