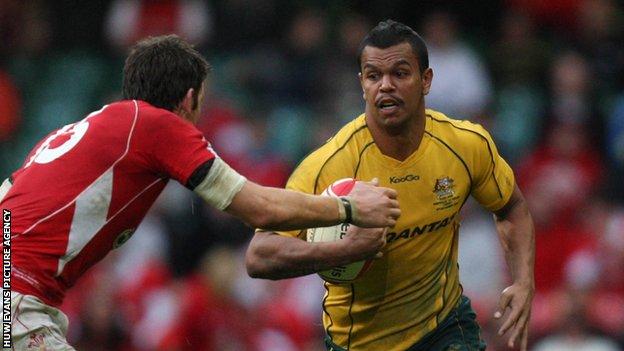 Australia have recalled full-back Kurtley Beale for the third Test against Wales in Sydney on Saturday.

Beale, charged with common assault following an alleged altercation at a Brisbane hotel a fortnight ago, has been out with a shoulder injury.

Adam Ashley-Cooper moves to the right wing to accommodate Beale with Cooper Vuna axed from the squad.

The only other change to the starting line-up sees Sitaleki Timani start at lock in place of Rob Simmons.

Vuna had been available for Saturday despite being found guilty of a dangerous tackle on Leigh Halfpenny.

The wing was sin-binned in the 59th minute of the second Test for challenging Leigh Halfpenny in mid-air as the Wales full-back leapt for a high kick.

With Australia opting for five forwards on the bench, there is no place for last weekend's Wallaby hero Mike Harris who kicked the winning penalty.

Beale has not played for the Wallabies since suffering a hamstring strain in the third place play-off against Wales at the World Cup last October.

"It has been frustrating for Kurtley, and he's obviously had some off-field challenges to deal with as well," said Wallabies coach Robbie Deans said.

"But it was important for all concerned that he had full confidence in his shoulder before we looked at re-introducing him to the Test arena."

While the James Bevan Trophy is already safely in the Wallabies' keeping after victories in the first two Tests, Deans is expecting another tough challenge from the Six Nations champions in Sydney.

"Wales are a very good side. They give you nothing and they take their scoring chances," he said.

"They showed that in the Six Nations and they showed it again last weekend.

"Both games in the series to date have been very close, there's no reason to suggest that Saturday afternoon will be any different.

"If anything, they will be even more dangerous because the circumstance will unshackle them.

"While they can no longer win the series, they can still achieve something only one other Welsh team has ever achieved by winning in Australia.

"And they have that opportunity in front of them with no real downside, nothing to fear, so to speak, as the series is beyond them."