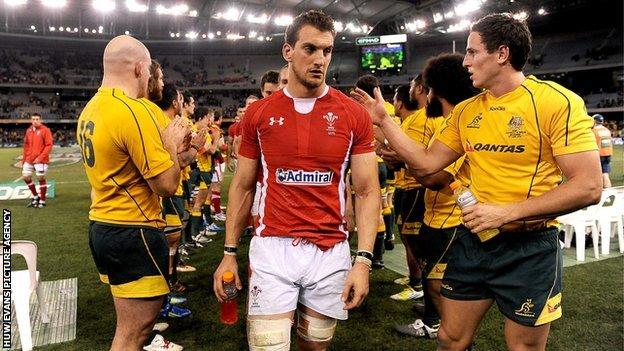 Wales caretaker coach Rob Howley has named an unchanged XV as they seek to avoid a series whitewash against Australia in Sydney on Saturday.

The tourists will also seek to claim their first victory on Australian soil since 1969.

Wales were beaten 27-19 in the first Test and then denied by a last-minute penalty in last week's 25-23 loss.

The only change from Melbourne is on the bench, with Ken Owens replacing Richard Hibbard as the reserve hooker.

"We know what we have to do to beat Australia, but there is a difference between knowing how to win and achieving that aim," said Howley.

"This Wales team was within around 30 seconds of beating the Wallabies on their home patch for the first time in 43 years.

"The challenge now is to go one better than that and make sure we are ahead on the scoreboard, not just when the hooter goes but when the game finishes this weekend.

"The players can take some credit for the way they played for the large part of the match on Saturday, but that will be scant consolation if we don't come home with a win in this series.

"We have risen to our highest position [fourth] in the IRB World Rankings because of our performances so far this season, which can have positive repercussions for the 2015 Rugby World Cup.

"But now we want to stay there and that means coming away with the spoils on Saturday afternoon."

Australia coach Robbie Deans has made just two changes in personnel to his starting side, recalling full-back Kurtley Beale and starting Sitaleki Timani at lock in place of Rob Simmons.

Adam Ashley-Cooper moves to the right wing to accommodate Beale, with Cooper Vuna axed from the squad.