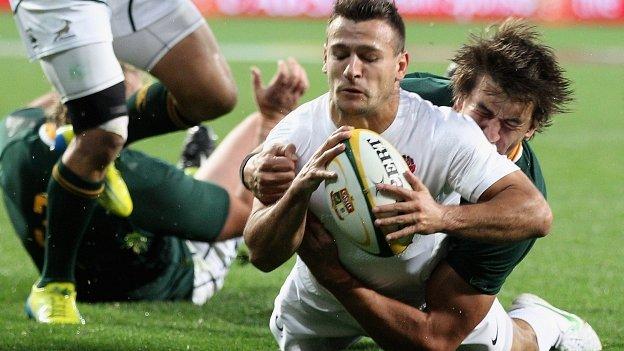 England earned a creditable draw in Port Elizabeth in the final Test of the series to end a run of nine straight defeats by the Springboks.

An early penalty from Toby Flood and Danny Care's try from a quick tap penalty gave England an 8-3 advantage.

JP Pietersen's try made it 14-11 but Farrell levelled matters before missing a last-gasp, long-range drop-goal.

It never looked like going over and in truth a draw was the right result.

England went into the game 2-0 down in the series and having lost more heavily in both matches than the scorelines suggested.

They picked a team to try and move the powerful hosts around but their plans were disrupted when fly-half Toby Flood was injured after just a few minutes and limped off soon after, to be replaced by Farrell.

By then England were 8-3 ahead after Care had sniped over from a quick tap penalty following Tom Palmer's charge-down on Steyn.

Flood - who had put England ahead with a penalty, soon cancelled out by Steyn - missed the conversion and was obviously in pain from his leg as he left the field.

Virtually from the restart English indiscipline handed Steyn the chance to trim the gap to two points, but the Springbok fly-half had an off day with the boot - missing three kicks out of six and also failing with a drop-goal attempt - and it was to cost his side victory.

He was successful just before the half-hour mark to edge the hosts into a 9-8 lead, but England went back in front courtesy of a Farrell penalty five minutes into the second period after a thumping Chris Ashton tackle on Gio Aplon.

After a lively first half the match became a much more edgy affair in the second, not helped by rain at the Nelson Mandela Bay Stadium, and England rode their luck as Steyn missed a second easy kick and England lost Dylan Hartley to the sin-bin.

They escaped without conceding any points in his absence, but no sooner had he returned than the tourists went behind once again.

Forwards and backs combined to get South Africa to within a couple of metres of the England line and when the visitors finally ran out of men out wide, Ruan Pienaar floated out a pass to Pietersen, the outnumbered Tom Johnson couldn't cut him down and the Bok wing ambled over in splendid isolation.

Steyn's conversion drifted wide but at 14-11 up the Boks looked set to pull clear - instead their own inadequacies and English resilience kept the scoreline the same until the closing stages.

After being under the cosh for much of the half a bullocking Manu Tuilagi run, followed by a dominant scrum from the English eight, earned Farrell the chance to level the scores with a penalty.

South Africa still had time to carve out a chance for Steyn to win the game but the boos rang round the stadium as his drop-goal attempt drifted wide.

England marched down the other end but could not get into the South Africa 22 and it would have taken a sublime kick to have won the match, but Farrell's attempt had the aerodynamic efficiency of a winged pheasant and never looked like going over.