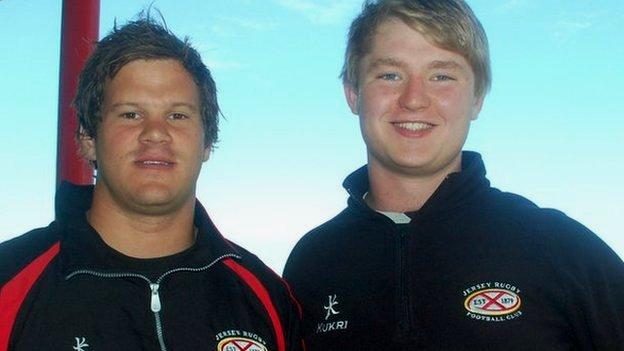 Clyde-Smith was named Most Improved Player after making 28 appearances for the islanders last season, helping them clinch the National One title.

And 17-year-old Voss, who only finished school earlier in the week, featured four times in the second row.

There's a lot of competition now in every position

"I see this more as a development year for me to play the best rugby I can and turn into an absolute monster.

"I feel honoured to play with the people I'm playing with, such as ex-internationals and up and coming players."

Clyde-Smith made his debut for Jersey in 2008 playing in the backs, but has since moved to the forwards playing both hooker and flanker last season.

But he will face competition for his spot at hooker during the club's first season in the Championship.

New signing Steve Boden and Dave Felton will both have their eyes on the number two shirt.

"I'm going to try and get involved as much as I can in the starting line up and on the bench," said 22-year-old Clyde-Smith.

"It's about really improving, getting the technical stuff right and learning from the guys we've brought in.

"There's a lot of competition now in every position and if you have an off day then you know someone's behind you ready to take your spot."

Teenage winger Chris Levesley will be kept on by the islanders but will stay part-time because he still has a year left on his studies.

Meanwhile Jersey have announced season tickets will go on sale on Monday.