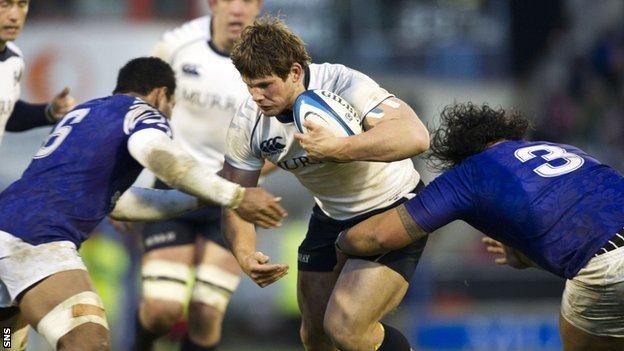 Ross Ford believes Scotland need to be "technically smart" to overcome the imposing physicality of Samoa.

"We're not going to stick any more meat on over the next few days so we have got to be quick," said the captain, ahead of Saturday's Test.

"And we have got to be technically very good on the day to compete against them. It is going to be a tough game."

A win would round the tour off well

The Scots are looking to claim their third and final win of the summer tour after defeating Australia and Fiji.

David Lemi, the wing who will play for Worcester next season after a year at Glasgow, skippers the home team, who make five changes from the side that beat Japan 27-26 to win the Pacific Nations Cup.

The most significant addition is the return of Tusi Pisi, the team's main playmaker at fly-half.

"Samoa have got a lot of strengths, a lot of the European players are back now," added Edinburgh hooker Ford.

"It is a strong team that they are putting out. They are a lot more structured than Fiji, but still have the ability to break defences with their big men and good steppers.

"They will be very physical, so it will be a tough challenge, but it is one that the boys are looking forward to. A win would round the tour off well."

Scotland last faced Samoa in November 2010 when they needed a last-minute penalty at Pittodrie to secure victory.