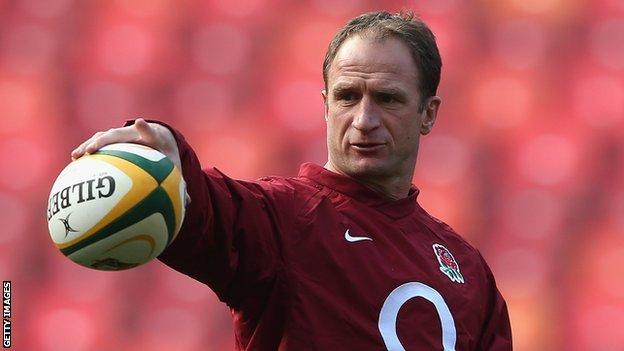 England assistant coach Mike Catt hopes he has done enough to earn a full-time role after the South Africa tour.

Catt told BBC Radio 5 Live: "Hopefully I've done enough over the past few weeks for Stuart to make a decision.

"What will be will be. I have done my bit and hopefully it will bode well for the future."

The former utility back played 75 games for England, scoring 142 points, and was in the World Cup-winning side of 2003. His coaching career began when he became player-coach at London Irish in 2007. He left the club to take up his current role.

He added: "[The tour] has been an amazing experience from my point of view. I've thoroughly enjoyed coaching these guys. It is a brilliant environment to work in."

England are 2-0 behind in the three-match Test series with the final game taking place on Saturday in Port Elizabeth, where Catt was born.

He said: "What we've learned over the past two weeks is that we have to play for the full 80 minutes. We just can't give South Africa a 20-point lead or a 20-minute block where they are going to get on top of you.

"The first half of the first Test was brilliant for us and so was the second half of the second Test. What we need to do is put the two together so we are not chasing our tails later in the game.

Mike Catt became the oldest player to play in the World Cup final - in 2007 when aged 36 years and 1 month.

"It has shown a hell of a lot of character for this young team to come out here and perform like they have done. They have had to learn very quickly and let's hope they can come away with a win.

"We just have to make sure we play in the right part of the pitch and we just need to box clever against these guys."

Dylan Hartley, who is taking over as captain from injured Chris Robshaw, aims to finish the tour "with a bang".

He said: "If we can pick up a scalp, that would be massive for this young team on the journey to the World Cup. The experience we have gained is invaluable.

"This is also another chance to lay down a marker for when they come over to Twickenham in November. We want to go out with a bang. We want to head off on our holidays with a win under our belts."