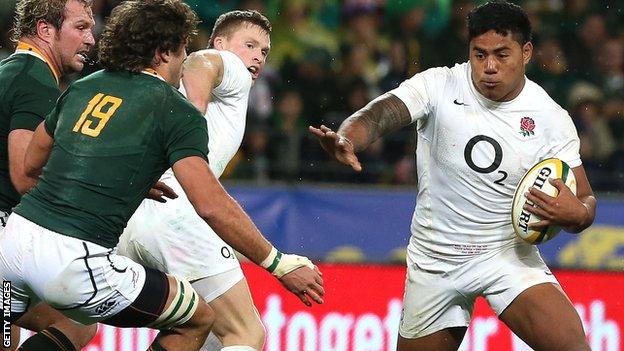 England head coach Stuart Lancaster admitted he was "gutted" not to have won the final Test against South Africa after his side ground out a 14-14 draw.

But Lancaster said he was "delighted overall with the efforts the boys put in over the course of the tour".

A young England side came from behind to avoid a 3-0 series whitewash.

England could have won the game at the death, but fly-half Owen Farrell's attempted drop-goal went well wide.

"We've got young lads making their debut - Alex Goode was outstanding at full-back. Overall, when you look at where we were and where we are now, I think we're in a good place.

"South Africa had over 500 caps in their side. We're a side just developing that experience."

Stand-in England captain Dylan Hartley was pleased with the way his side ended a difficult tour on the front foot in Port Elizabeth.

"It's been a tough tour - we've grafted hard, just haven't played for the full 80 minutes," he said.

"Today we strung together a full 80 minutes. Defence was good, ball-retention was good - we just didn't come away with the result.

"In the last two games we've learned when the green machine gets going they're hard to stop. We took a bit of pride today in two-man tackles, getting it off the line, stopping their momentum.

"A draw's a draw. We'll take it and look forward to playing the boys again in November in England."

But he added: "I thought we weren't good at all tonight. We'll have to take a hard look at ourselves.

"Our option-taking was poor at times. Obviously the [rainy] weather doesn't make it any easier. At least we didn't lose the game - that's the only positive we can take out of this."

Recalled flanker James Haskell was pleased with the way England have developed during the tour, but frustrated not to have come away with a win at the last.

"The squad's come on really well. It would have been good to get a win," he said.

"Unfortunately, I just don't think we were good enough in attack. We just didn't get enough calls going our way in the breakdown battle."