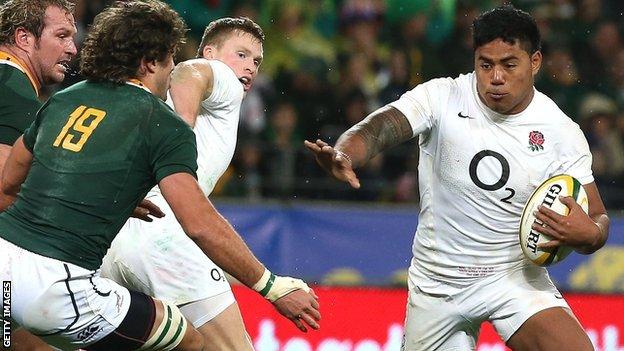 After losing the first two Tests, Englandfought back to draw the final Test against South Africaon Saturday.

Former England hooker Moore was in South Africa as an analyst for BBC Radio 5 live - here he runs the rule over England's summer tour.

Are you satisfied England made a statement in the last Test and that everything is going in the right direction?

England shouldn't be satisfied because there were significant defects both in the draw and all the other games. What they can be satisfied with is that they have made progress.

They have not made as much as maybe they ought to have done but what you can say is that, in a difficult Test series and after only one Six Nations together, they've come away and been very close in two Tests, and drawn one.

That is significantly better than a lot of other sides have done recently.

Have England played better in South Africa than during the Six Nations?

Were it not for a bit of indifferent kicking - and not just the last drop-goal from Owen Farrell - the third Test should have been won.

What do they need to work on?

What will annoy Stuart Lancaster, and should annoy the players, is the amount of self-induced difficulties they had and not just in terms of unforced errors.

Giving away penalties they do not need to concede around the 10m line has been a bad fault of English rugby for a long time and there was a rash of them again.

They are committing hara-kiri because you cannot do that against top sides like South Africa, New Zealand and Australia - they will punish you.

What does their recovery from their battering in the first Test tell us?

It shows that as a squad they have a lot of heart and a lot of endeavour, because I have seen teams crumple from the position they were in.

The trick, obviously, is not to put yourself in that position, and they rectified that in the third game.

I thought Thomas Waldrom and James Haskell made significant contributions up front, beefing up the forward effort.

South Africa weren't able to get across the gainline with the momentum they'd had in the previous games and that was a significant factor.

Who stood out on Saturday?

Danny Care made a significant contribution, his speed of thought and deed gave England an extra dimension.

Number eight Waldrom was tremendously effective in carrying the ball, allied to Haskell, whose physicaility was immense on the flank.

Manu Tuilagi showed if he's used in the right way that while it's easy to spot him coming, it's not easy to stop him.

Alex Goode was a positive from the moment he stepped off the plane - he played an almost faultless game at full-back, although he wasn't able to contribute as much as he does for Saracens going forward.

As for the series overall, I thought the front row did well. I wouldn't want to pick one of them out, because it was a group effort, but they came on leaps and bounds.

They managed to hold South Africa and then eventually get on top of a strong front row that has been rated as world class, and I think in that area England had the advantage over the Springboks, which is not insignificant.