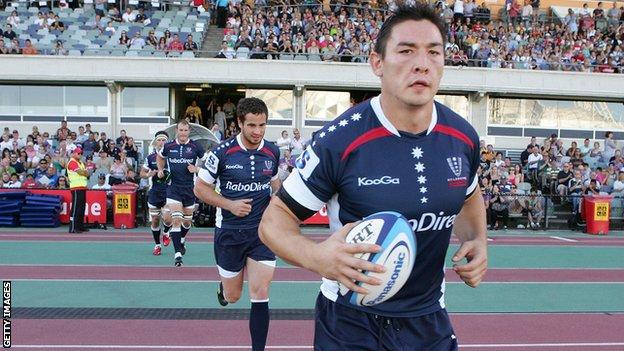 Gareth Delve has extended his stay at Super 15 side Melbourne Rebels and signed a one-year contract extension.

The Wales number eight had been in talks with French Top 14 club Toulon but Delve has decided to stay with the Rebels for the 2013 Super Rugby season.

Delve became the first Welshman to play Super Rugby when he joined the Rebels ahead of their inaugural season in 2010 and he captained the Australian side.

"I am thrilled to sign on for another year," said the 29-year-old.

"I believe this club is moving in the right direction and now I can continue to be a part of that.

"There was always an element of risk associated with the move, but I have thoroughly enjoyed my time in Melbourne.

"From a rugby perspective, playing against the world's best week in and week out has been great for the development of my game.

"It was always going to be a massive challenge, but I am very happy I came to Australia to play in this competition.

"On a personal note, I am thrilled to be staying in Melbourne, I have become very attached to this city over the past two years and it certainly feels like home now."

Delve, who was a part of Wales' Grand Slam squad in 2008, signed for Bath in 2001, making his debut for Wales in 2006 before moving to Gloucester a year later.

He was recently called into the Wales squad for their three-Test series in Australia as a replacement for the injured Toby Faletau but Delve did not add to his 11 international caps.