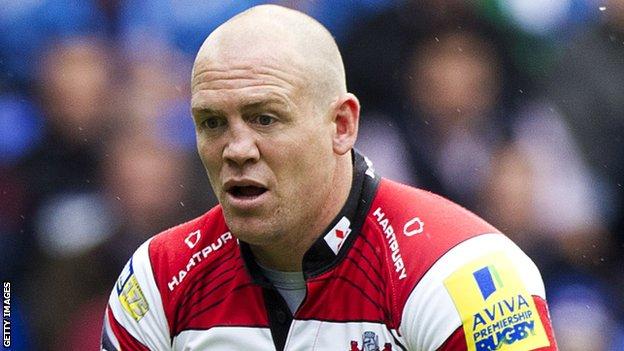 Mike Tindall has agreed a new deal with Premiership side Gloucester to become player-coach at Kingsholm.

The 33-year-old has agreed a one-deal which will see him combine playing with becoming backs coach.

The club announced Tindall's departure in April but the former England centre stated he would be open to staying.

"He's shown passion, pride in the shirt as a player and I'm sure he'll do equally as a coach," director of rugby Nigel Davies told BBC Gloucestershire.

Tindall, who is married to the Queen's grand-daughter Zara Phillips, will be working with an exciting-looking backline that includes Freddie Burns, Charlie Sharples and Jonny May.

Davies himself was credited with bringing through young Welsh talent such as George North, Jon Davies and Rhys Priestland, and he is confident Tindall can have a similar effect at Kingsholm.

"Hopefully what he'll be able to do is mentor the younger players, and we have got a very young and exciting backline that he can work with," he added.

"It's a completely different role, he's coming across to the dark side, as it were, and players will see him in a slightly different light.

"But I firmly believe Mike can make the grade with a coaching career and I'll support him in every way."

The former Bath centre, who has played 75 times for England, said he had previously received other offers to play abroad and from clubs in England.

He returns to Kingsholm for an eighth season, equalling his stay at Bath, and Davies wanted Tindall to return to keep some continuity going into next season.

"Part of what I'm used to is lineage and making sure people who embody the values and traditions of the club are involved, and particularly in some sort of coaching capacity," he said.

"Having spoken to Mike, his heart is really in Gloucester rugby.

"I do believe he's got a very good knowledge of the game, a huge amount of experience and I think it's very important for Gloucester rugby that we involve people like Mike."