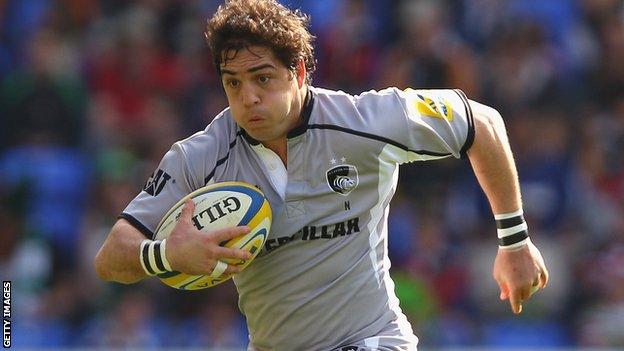 The Argentine, 27, was not offered a new contract by the Tigers because he will miss the start of the season because of international commitments.

"He's a hard-working winger, I like his attitude. He's a no-nonsense type of guy, who gets on with it."

Agulla, who has been capped 34 times by Argentina, played 48 times for the Tigers during his two-year stay at Welford Road, scoring eight tries.

The former Brive winger, who can also play full-back, was a popular figure at Leicester, winning the 2011/12 fans' player of the season award.

He could be involved in the Rugby Championshipuntil 6 October, but Gold is comfortable with him missing the first month of the new Premiership season.

"We've strategised for that, we've understood what we're getting in the guy," he said.

"He's been open-minded in terms of our expectation and it's been a really good marriage because he's come here understanding that we're prepared to let him go away and prepare for Argentina, and he comes back here in a competitive league and hopefully a really good club in Bath.

Gold added: "We're so excited to have him on board and I think we're going to get a more confident, more experienced player when he arrives in a couple of months time, because of his experience of playing against Australia, South Africa and New Zealand.

"We get him back fresh and we'll have him at a very important time of the year, which is Christmas time, when all the teams have picked up a few niggles here and there."