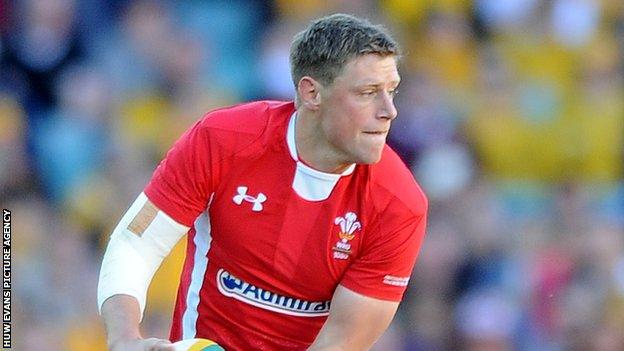 Wales fly-half Rhys Priestland has been backed by his former coach Nigel Davies after coming in for criticism during the 3-0 series whitewash in Australia.

Wales came close to a win in the final two games but the Scarlets pivot found himself under fire for mistakes.

In the second Test 25-year-old Priestland controversially kicked ball away which helped Australia's cause.

"Rhys is a quality player and he will play for Wales for years to come," said Gloucester director of rugby Davies.

"But it goes with the turf unfortunately when you play 10 for Wales."

As well as the kicking error in the second Test, the 18-cap Priestland was guilty of a costly handling error in the first Test that ended one of Wales' most promising attacks.

It prompted Wales caretaker coach Rob Howley to demand a big display from Priestland in the next game.

"I can remember Stephen Jones and Neil Jenkins in my time - fantastic players. But you always have periods when you get a lot of stick if you are a 10," said Davies.

"Rhys is having that now - he is used to it. He's done it with the Scarlets and he came through a very rough patch there and he just kicked on.

"It's part of his learning experience. I could see that Rhys was reading the game very well [in Australia].

"He didn't always execute what he wanted to do. He is playing within a game plan as well - there are a number of factors."

Wales went down 27-19, 25-23 and 20-19 in the three Test matches but Davies says Howley's side should be applauded for their efforts down under.

He believes the physical gap has closed between them and the southern hemisphere sides and they are now getting to grips with the mental side of the game.

"The margins were very tight. All three games Wales could have won," insisted Davies.

"Their commitment was fantastic. The way they played for the vast majority of those games was great and they are getting there.

"I can remember in the mid-90s going to Australia and being thumped by 50 points, so there is no doubt that Wales is moving forward. It's great to see the Wales Under-20s come third in the World Cup.

"So, I think you have to look at the positives and not the negatives in this and look historically where Wales have been over the last 30 years and where they are getting to now and there is a lot to be optimistic about.