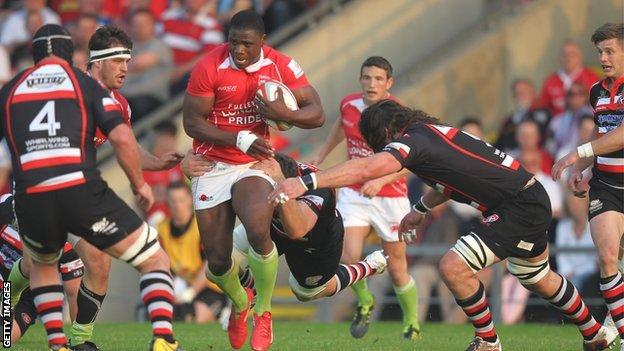 The clubs in England's Championship claim the Rugby Football Union has failed to pay them what they were promised when they league was set up.

The RFU promised initial funding of £2.3m plus £1m from Premier Rugby for eight years, with funding increased year-on-year.

But clubs say there is a £77,000 shortfall between the amount promised and what they have actually received.

They claim if a similar discrepancy continues each club will be £120,000 out of pocket come the end of the eight-year arrangement.

"All of the clubs in the Championship are busily preparing for the new season but we are being constantly hampered by the RFU's refusal to deliver what they promised," said Championship chairman Geoff Irvine.

"Every club in the league has embraced the format in spite of the concerns that were allayed prior to its inception and everybody can see the impact that the Championship has on Premiership and international rugby.

"No one would argue the fact that playing standards have risen and that the dual-registration scheme has proven a success with many Premiership teams clambering at the opportunity of their youngsters playing in such a demanding environment.

"What is of particular concern to the clubs though is that the RFU refuses to fulfil its responsibilities to the Championship when it 'owns' the competition.

"The RFU has not kept the promises that it made and if we want to see standards improve then we need to have a commitment that is honoured."

The RFU has, so far, been unavailable for comment.

A number of clubs in the league have suffered financial problems in recent years including Nottingham, last season's winners London Welsh, and, most recently, Plymouth Albion.

Albion's chairman Graham Stirling told BBC Sport that if more funding was not made available one or more teams in the league would eventually go bust.

"It's requiring tremendous effort from a number of clubs to keep their shows on the road," he said.

"We are heavily dependent on central funding and a number of clubs are reliant on generous benefactors.

"If they withdraw their support a number of clubs would be in immediate difficulty - we shouldn't entirely rely on that sort of support."

Stirling was involved in the initial talks four years ago on revamping English rugby's second tier and says the aim of improving the standard of rugby outside the Premiership has been achieved, despite not having as much RFU money as clubs would like.

"I don't know what the obstacle is, it's not a massive amount of funding collectively to make it sustainable and it's disappointing that we are not making headway," he said.

"We've got to make sure we get the right funding base to keep the Championship viable."