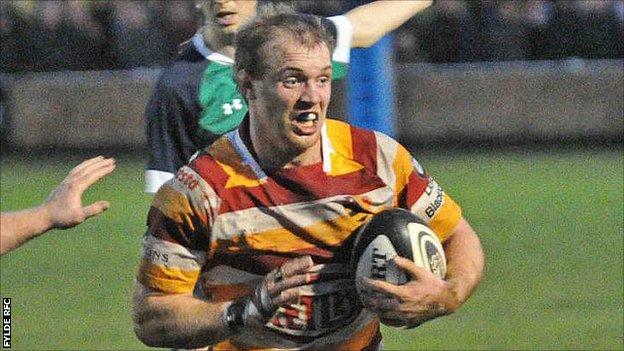 Evan Stewart has been appointed as the new captain of Fylde after Sam Beaumont gave up the role earlier this week.

The Northern Irish flanker impressed in his first season with the club and said: "Accepting the captaincy was an easy decision to make.

"It is a huge honour to captain any team you are involved in.

"But to be asked to lead a group of players like we have at the moment at Fylde is an amazing opportunity that I couldn't pass up."

Beaumont, the son of former England and Lions skipper Bill, decided to relinquish the captaincy after three years in the role in order to concentrate on a new business venture and his playing career.

"Evan has great experience as a captain at both Loughborough and Macclesfield," he said.

"He leads by example, as well as articulating strategy and motivation to the team. He is a natural successor to Sam Beaumont and I was extremely pleased when he accepted my invitation to captain the side."

He scored 46 tries in 101 appearances for the club but will link up with his new team in August.

"Leaving Fylde has been a big decision for me as I have made many lifelong friends here and feel very at home, but playing abroad is something I have always wanted to experience and now feels like the right time to give it a go," said Waywell.

"Kowloon are the top team in the Hong Kong Premiership and I am excited about joining them, plus the season only being six months long will be a welcome change."