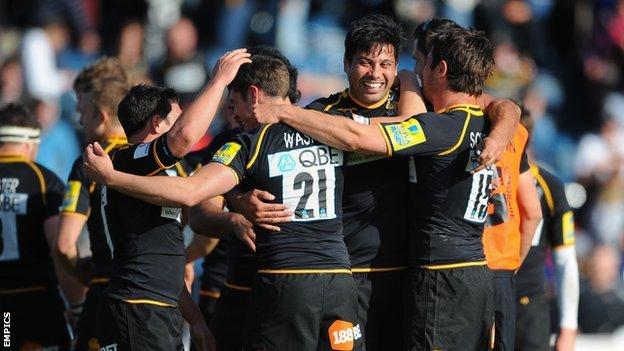 London Wasps have moved closer to a takeover by a consortium led by former player Ken Moss.

Contracts have been exchanged for the sale of the club, with completion expected to take place in mid-July.

The High Wycombe-based outfit have been looking for a new owner since Steve Hayes announced he intended to sell the club last October.

Wasps endured a torrid campaign last season and only avoided relegation from the Premiership on the final day.

A club statement, released on Friday, said: "Full details of the new ownership and future plans will be outlined once the deal is fully completed.

"The club's priority is now on ensuring the deal is complete within this time frame as well as finalising arrangements for the club's future structure and operations."

The five-time English champions were taken over by Hayes in January 2009 and six months later he also took control of Wycombe Wanderers FC, whose Adams Park stadium is used by Wasps as their home ground.

But plans to build a new stadium for both clubs were rejected last summer and Hayes announced he intended to sell the former Heineken Cup champions a few months later.

The off-field turmoil was reflected on the pitch where Wasps finished ninth in 2010-11 and then, under new director of rugby Dai Young, languished towards the bottom of the Premiership for much of last season.

They faced the prospect of relegation at the end of the campaign and, with no real assets other than their players, the possibility of no new investment and the potential that they could fold.

But a vital losing bonus point away at Bath, thanks to a last-ditch tackle by Tom Varndell, left relegation rivals Newcastle needing to win by 24 clear points in the final game of the season - which, despite winning the match, the Falcons failed to do.

Wasps will continue to play at Adams Park next term, under their current contract terms, but the Moss consortium are believed to want to build a new home for the club somewhere close to the M40 to secure their long-term future.