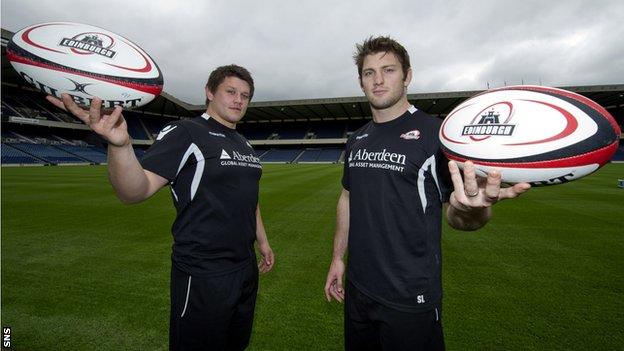 Scotland A cap Lawrie playing 12 times for the Pro12 outfit last season before suffering a knee injury in December.

He becomes the fifth player to graduate from the club's elite development programme to a full-time professional contract for next season.

I'm desperate to get myself right and fight for my position

Matt Scott, Grant Gilchrist, Harry Leonard and Alex Black are the others.

Walker, who played club rugby for Musselburgh and Currie and has represented Scotland up to Under-20 level, was especially pleased to scoring for Edinburgh against Ulster in January.

"I got a fair bit of game time last season, which, for me, was a big highlight, as was scoring my first try and getting to work as part of the Heineken Cup squad leading into last season's quarter and semi-finals," he said.

"It was all a great experience for me and I owe a lot of my progress to the strength and conditioning coaches for bringing me on physically.

"I know I've still work to do in that area if I want to compete with the best, but I'm well placed for my age in this position."

"I was really pleased with how things were going up until Christmas and am delighted to extend my contract at a really exciting time for the club," he said.

"You only have to look at the number and quality of the players we've signed to understand how tough it's going to be for players to get into the starting 15 and I'm sure that will bring out the best in the squad.

"I'm desperate to get myself right and fight for my position, which means fending off Alun and having a good shot at Ross.

"Although he's Scotland captain, there's no point being happy sitting on the bench, or not being involved at all."